International (RBD/MNN) — Reach Beyond is expanding its reach for Christ by sending 4,000 new SonSet® radios that have FM, AM, satellite and shortwave capabilities to the Asia Pacific Region for distribution in multiple countries. 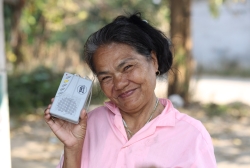 A Thai woman listens to a Christian program
on her SonSet radio fixed-tuned to a
local community station.
(Photo and caption by Reach Beyond).

The new technology is part of an ongoing, sustained push by Reach Beyond’s global effort to reach the unreached. The Asia Pacific Region has the highest concentration of those who have not heard the Gospel.

“As a part of what we are calling the ‘SonSet® Effect,’ we can take the Gospel to places where the name of Jesus has never been heard,” said Wayne Pederson, president and CEO of Reach Beyond. “This new technology will be able to reach thousands more than before in some of the world’s most remote regions.”

To date, more than 500 radio stations have been planted together with local partners worldwide, and more than 50,000 SonSet® radios have been distributed in dozens of countries, such as Thailand, Ghana, Lesotho, Ecuador, and Panama. Each radio can reach anywhere from one person to an entire community.

Reach Beyond has described the radios as “little missionaries” that can go even where it’s too dangerous for missionaries to travel. The radios are solar-powered and fixed-tuned to a local Christian radio station. All people have to do is press “on” and instantly they are listening to the Gospel in their own language from their own community.

The previous version was only able to pick up FM stations. The new unit adds AM, satellite, and shortwave capability. So now, regardless of the broadcast method, a person can get access to a particular station.

This is especially important in closed locations where local stations do not exist or can’t be licensed, such as China or anywhere in the Middle East, Pederson said. In those cases, SonSet® radios can now use shortwave or satellite technology.

To contribute to radios being sent out, click here.