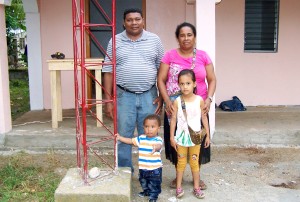 Pastor Harlan Macklin and his family next to the
tower at his church-based radio station.
(Photo and caption courtesy of Reach Beyond)

Honduras (MNN) — Reaching rural villages for Christ can be a challenge. When they’re only accessible by boat or plane and have very few means of efficient transportation, effective ministry can be nearly impossible.

That’s the case in Puerto Lempira, a tiny fishing village on the coast of Honduras. But with modern communication technology, even this village is not unreachable for Christ.

Honduran Pastor Harlan Macklin dreamed of using technology to reach his people with the Gospel. That began to become a reality when a Reach Beyond radio technician, as well as an engineer from Ecuador, helped construct a radio station in the pastor’s church.

“When we arrived, there was a tower standing with nothing on it, and there was a studio building all finished and painted,” Tim Zook, the radio technician with Reach Beyond, says, “We couldn’t touch the walls, it was so new because of the wet paint. And so we set up all of the studio equipment on the counter tops, and then in the portion of the building for the transmitter, we set that up with a large UPS and also did the surge protection in the grounding. We worked for a week to put all this together.”

A village as rural as Puerto Lempira may seemingly have no use for modern technology. But with cell phones being a common possession for both the young and old, and even the most basic models able pick up an FM signal, radio is an effective form of ministry.

“Pastor said in a telephone call after a few days of operation that he was very pleased with the coverage,” Zook says. “In other words, the signal went beyond what they were expecting.” 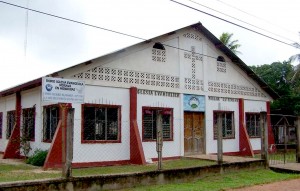 Moravian Central Church is home to the new radio station. (Photo and caption courtesy of Reach beyond)

As the station spreads the Gospel, others are being encouraged to do the same. At the station’s dedication ceremony, a pastor from a nearby village asked how he could start a Christian station of his own.

“The tower was built and…stood up by a local welder, and he was willing to do the same thing for this other pastor. So he’ll probably get the local welders to make him a tower as well, and we’ll do the process all over again,” Zook says.

Can you help provide the funds necessary to help this station and others continue to spread the Good News? Click here to learn more about Reach Beyond’s radio ministry and how you can support it.