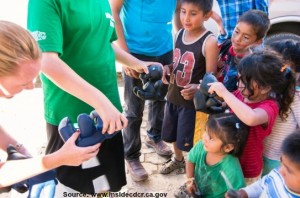 USA (MNN/CRBI) — What do you think prisoners are thinking while sitting in their cells?

Hopeless, perhaps? Maybe they wish they could take back a moment in their life?

A prisoner with Crossroad Bible Institute is eliminating those mind-numbing thoughts for himself and for others around him by making teddy bears.

Lorenzo, who is a CBI student in California, explained he was trying to reconcile and give back to society, despite being in prison.

His goal with this project is to help other incarcerated men realize that they are not a hopeless sum total of their mistakes, but they are capable of change. “They are not bad people,” Lorenzo says. “We only make bad decisions.”

After receiving an enthusiastic response from other prisoners, Lorenzo wanted to find a way to get the bears from the prison workshop to underprivileged children on the outside. As a result, the Create a Bear with Care program was born. Recently, Lorenzo’s program sent 50 bears to children living in a home for battered women, and another 100 bears to the Angel Tree Foundation.

Since then, Lorenzo and his fellow “bear artists” have been able to see photos of the kids who receive their huggable creations. The prisoners’ reactions to the photos are telling.

“If I could share with you the look of joy and pride on the faces of these men who helped make the bears for these kids, it would bring tears to your eyes,” Lorenzo says. “You would know that God did a wonderful thing in many lives, and not just the lives of the kids.”

Lorenzo is giving hope and joy to so many around him. He’s ignored the chains and brought a new task to his life and others.

Pray for the program to continue making a difference and for people to find how loving God is through it.