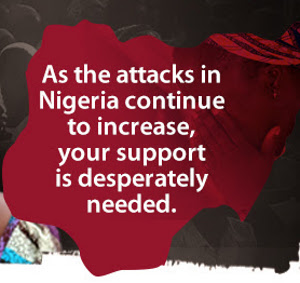 Nigeria (MNN) — [The following is a News Flash from Open Doors USA.]

The reason for the postponement is that the INEC received a letter from security agencies indicating that they are not available to provide protection during the elections as they will be starting a 6-week campaign against the Islamic terrorist group Boko Haram on Friday. The postponement of the elections has stirred controversy among the opposing political parties.

Boko Haram launched a new attack on neighboring Niger. Niger is voting whether to join a regional force against Boko Haram, which is working to build a caliphate (Islamic government) in northern Nigeria, Cameroon, Niger, and Chad.

The number of Internally Displaced Persons (IDPs) in northern Nigeria has hit the 1.5 million mark due to the ongoing insurgency of Boko Haram, the UN agency for refugees (UNHCR) reports.

According to Associated Press News, officials in President Goodluck Jonathan’s government have been calling for weeks for the postponement, saying the commission is not ready to hold what promises to be the most tightly-contested presidential vote in the history of Africa’s biggest democracy.

The United States had been urging Nigeria to press ahead with the voting. U.S. Secretary of State John Kerry visited Nigeria two weeks ago and said that “one of the best ways to fight back against Boko Haram” was by holding credible and peaceful elections, on time.

Nigeria is ranked #10 on the Open Doors 2015 World Watch List of the worst persecutors of Christians. Last year, a total of 2,484 Christians were martyred in Nigeria, the highest total of any country in the world.