Iran (ACLJ/MNN) — The following is an update by the American Center for Law and Justice about Pastor Saeed Abedini.  As the two-year anniversary of his arrest approaches, please be in prayer for his release, his strength of faith, and for the perseverance of his family. 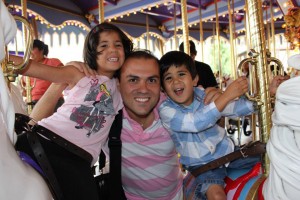 American Pastor Saeed Abedini, a Muslim convert to Christianity, faces an 8-year prison sentence after his September 2012 arrest and indictment in Iran because of his religious beliefs. The Iranian government refuses to recognize his U.S. citizenship or make his charges public. Abedini’s U.S.-based family is being represented by the American Center for Law and Justice (ACLJ).
(Photos courtesy of ACLJ).

More than 700 days ago, American Pastor Saeed Abedini boarded a flight to Iran and never came back. Christmas has come and gone twice; he has missed children’s birthdays and other family celebrations. After many false hopes that freedom could come, the Boise, Idaho resident remains imprisoned by the Iranian government on charges related to his Christian faith. Now, two years to the day of Abedini’s incarceration, thousands will gather in more than 460 vigils in 30 countries and territories to pray for his safe release and call upon their governments to act on his behalf.

The prayer vigil participants will join global supporters who have contributed more than 900,000 signatures to petitions and letters demanding Abedini’s freedom.

“The kids and I are longing to see Saeed returned home safely to us. The kids have been suffering for too long. Our family is ready. It is time,” said Naghmeh Abedini, the pastor’s wife. “We are praying for a miracle. My hope is that, as thousands gather together on September 26, our governments and leaders will be reminded of the importance of religious freedom for all and continue to pressure Iran to secure Saeed’s release.” 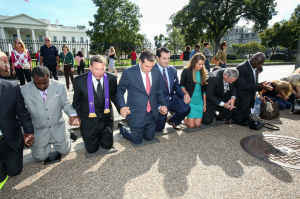 U.S. Sen. Ted Cruz of Texas (center, red tie) and ACLJ Executive Director Jordan Sekulow (right of Cruz) kneel in prayer outside of the White House on Sept. 26, 2013. Cruz and other national political and faith leaders joined with the ACLJ in calling for Pastor Saeed Abedini’s release at prayer vigils marking the one-year anniversary of the pastor’s imprisonment in Iran. (Photo courtesy of ACLJ)

The day after last year’s prayer vigils on the first anniversary of Abedini’s imprisonment, President Barack Obama made a historic phone call to President Hassan Rouhani of Iran in which Obama expressed concern about Abedini’s treatment and called for his release.

“Pastor Saeed has become the face of the persecuted Christian church worldwide, one of many Christians around the world who face imprisonment, beatings, and even death for their faith,” said Jordan Sekulow, executive director of the American Center for Law and Justice (ACLJ), the law firm leading global awareness efforts to free the jailed pastor. “As the world’s eye turns to violence against Christians in the Middle East, we raise a united voice in urging Iran to free Pastor Saeed and grant him clemency. It’s time for Saeed to come home.”

Arrested in July 2012 while building a government-approved orphanage, Abedini is currently serving an eight-year judgment at Rajai Shahr Prison in Karaj, Iran, a place where “every day is a potential death sentence,” Sekulow has said.

Despite suffering from repeated beatings, malnourishment, and lack of proper medical treatment, local family members report that Abedini remains hopeful, writing of himself: “A Prisoner in the Darkness in Iran, but free for the Kingdom and Light.”

7,000 miles apart, Abedini and his wife Naghmeh–who remains in Boise with their two young children–celebrated their 10th wedding anniversary earlier this summer. Their daughter, Rebekka, celebrated another birthday just over a week ago without Saeed present this year. She turned 8 years old just days before the anniversary of her father’s imprisonment.

Based in Washington, D.C, and led by chief counsel Jay Sekulow, the American Center for Law and Justice focuses on life, free speech, religious liberty, human rights, and constitutional law. The ACLJ is online at ACLJ.org.