Kenya (MNN) — Would you take a moment to pray for Kenya’s believers? Amie Cotton with Christian Aid Mission, your link to indigenous missions, says al-Shabaab sympathizers are trying to drive Christians out of northern Kenya.

Earlier this month, “36 quarry workers, who were known as Christians, were paraded out and killed. And one of our ministry leader’s friends — it was one of their sons. They had to bury their son,” Cotton shares.

Churches in the region are closing down, and many Christians are relocating to Army barracks; some are vowing never to return.

“Despite all of this, we still have reports that ministry is ongoing in multiple cities,” says Cotton. 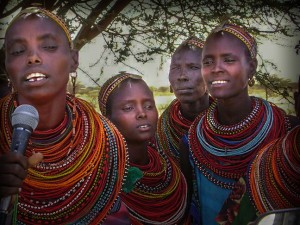 In Kenya, a Rendile woman in Korr leading in a song.
(Photo, caption courtesy Christian Aid)

Christian Aid partners with 7 indigenous mission groups in Kenya whose scopes of ministry focus range from well-digging to church-planting. No matter what physical need the ministries are meeting, they each carry a desire to introduce their fellow Kenyans to Christ.

“They go out every day, on the edge, knowing that terrorists have infiltrated. But they’re willing to go for the cause of Christ,” Cotton notes.

Earlier this week, Kenya’s government shut-down over 500 charity organizations in an effort to cut-off terrorist funding. According to the U.S. Treasury Department, fake non-government organizations (NGOs) are a popular funding method used by many terrorist groups.

Generally, the fake NGO will present a cause or social need to solicit donations. Then, they secretly funnel the money to terrorist groups like al-Shabaab.

So, how can you know Christian Aid or their ministry partners aren’t doing the same thing? 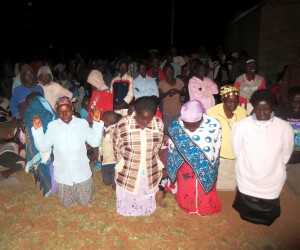 “We have been in existence for over 60 years, and we have relationships with grass-roots Christian ministries that are indigenous to their cities and to Kenya as a whole,” Cotton answers.

“In fact, our Africa Director just got back from a trip; he meets with the leaders, he sees the work that’s going on. We know that these ministries are legitimate, and they are our brothers and sisters in Christ.

“They are risking their lives to go out and share the Gospel.”

You can help with the financial needs of persecuted Christians in Kenya here.

“Pray for security,” Cotton requests. “Pray for those that are out on the edge; they ask for wisdom and discernment from the Lord as to how to reach seekers and how to encourage Christians.”