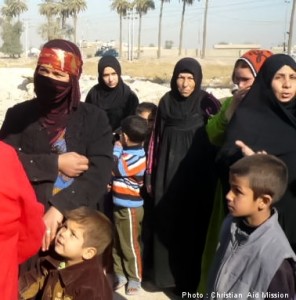 Iraq (MNN) — With all the bad news surrounding Iraq these days, it’s good to hear a positive update.

Pray for these new followers of Jesus, especially those who formerly proclaimed Islam. Christian Aid says Muslim-Background Believers (MBBs) face the fiercest persecution because they’re viewed as traitors. They face difficulty in some Christian circles, as well, because of fear. According to Christian Aid, “Some congregations are reluctant to allow MBBs to worship with them, either out of fear that they are spies or that angered Muslims will attack their church.”

Read more about the hardships MBBs face in this Christian Aid report.

Since ISIS moved their campaign of terror from Syria into Iraq earlier this summer, indigenous missionaries have been working around the clock to care for people in need. With funding wired from Christian Aid Mission, the ministries are easily able to buy supplies from local markets to distribute to the needy.

“In a crisis like this, we are experiencing a time of revival and awakening everywhere,” reported one ministry leader. “God is not just moving people geographically, He is moving in their hearts, as well.”

You can also share this report on social media using the hashtag #HelpLocalIraq.