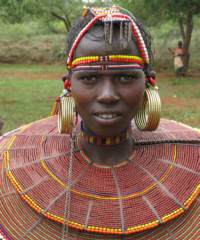 Many of their religious beliefs are connected to their lives. Travelogues show that their animism has a deep root in sacrifice. According to their mythology, the universe consists of two plains: the above refers to the sun and the rain. The below consists of the humans, animals, and plants. The Pokot are proud of their culture and heritage, and every ritual instills that meaning into the next generation. World Mission CEO Greg Kelley says they recently visited North-Central Kenya where about 130,000 Pokot live.

Throughout the region, less than 10,000 people are followers of Jesus. The story of the Gospel makes sense to a people already used to sacrifice, so World Mission teams distributed the Treasure–a solar-powered audio Bible, and they saw immediate impact. “We were just told about a village just down into the valley that had not a single Christian among them,” says Kelley. A couple of years later, because of Treasure distributions and the Word of God, there are now 70 people worshipping Jesus in a new Church.”

More than that, the hope of the Gospel equips the followers of Christ to deal with the challenges of survival. According to National Geographic, the group is nomadic, splitting into the Hill Pokot who practice both farming and pastoralism, and the Plains Pokot who living in dry and infertile plains, herd cows, goats, and sheep.

Kelley explains, “Currently, they’re enduring the worst drought conditions since the 1980s, so it’s having an enormous effect on these pastoralist people who have goats, and cows, and some camels, as well.”

The area where the Pokot live is neglected, with no roads, medical facilities, or schools. It’s also violent because of issues with rival tribes, says Kelley. “There’s a lot of battling back and forth and raiding. It’s like the Wild, Wild West,  where people are taking property and they’re taking animals from one another; unfortunately there are fatalities involved in many of those instances.” A lack of education keeps people so poor that the elders are now sharing concerns about a survivable future for their young people. World Mission and several other holistic ministries are trying to turn that around, physically and spiritually. 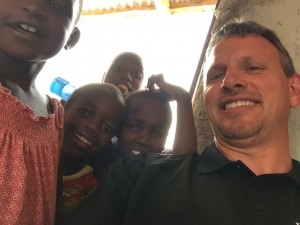 For the Pokot, hope goes a long way. With a small group of 70 followers of Christ in a new Church, it’s a seed that is bound to grow quickly. Since the people group has an inclination toward spiritual thinking, Kelley closes with this last thought: “Please pray for the Pokot people of Northern Kenya, that the Gospel would get entrenched here, that there would be revival in the land, and there would be peace among the neighboring people groups.”