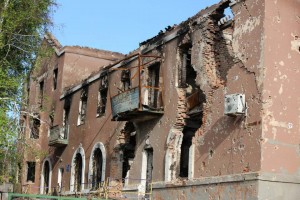 Mission Eurasia recently reported the death of one of their pastors, Sergei Reuta, near Donetsk, Eastern Ukraine.

Several months ago, the evangelical church near Luhansk, where Sergei served as a pastor, was taken over by the separatists, and all the church members were forced to leave the area. Sergei’s own house was also occupied by the separatists. He was warned that if he stayed, he would be executed.

At that time Sergei’s family moved to live with their relatives near Donetsk, where he began working as a volunteer chaplain to counsel Ukrainian solders who were fighting for their land. Pastor Sergei quickly earned a special name among the solders and in the entire area: “Padre,” which means “father” in Spanish.

Last week as Sergei was on his way to visit and pray with wounded soldiers, he was killed when a shell hit his car.

Sergei’s wife and three children have no means to support themselves, and they need our help.

Every donated dollar can help provide Sergei’s grieving family with food and shelter, and take care of their immediate expenses, as they are moving to Kiev.

Please pray for Pastor Sergei’s widow, Lena, and his children.

To help the Reuta family at this very difficult time, click here.