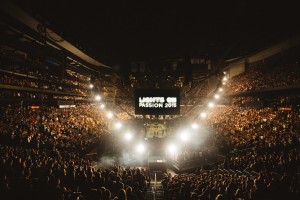 USA (268 Generation) — Some 20,000 young adults from across the globe filled Atlanta’s Philips Arena on Friday, Jan. 2, for the first of three, 3-day gatherings for Passion 2015. Students spend each day in sessions of teaching and worship led by notable Christian speakers and worship leaders.

In the past few years, the students at the Passion Conferences have given more than $7 million to provide awareness, prevention, rescue, and restoration to fight modern-day slavery.

Students also filled bins with thousands of towels and socks–two of the most-needed items at homeless shelters–upon arrival at Passion events. “He [God] wants the people of this city to feel lifted by a gathering of this size,” said Passion City Church’s Pastor of Community, Brad Jones, of the initiative as the first session began. This year, Atlanta’s City of Refuge will receive the needed items.

Friday night’s session captivated attendees with a digital conversation, posing questions on the screen ranging from “Who has never been to Passion before?” to the heavier, “Have you experienced heartbreak this year?” Students responded with a glittering display of cellphone lights and vulnerability.

Then familiar faces of The Passion Band including Chris Tomlin, Christy Nockels, Kristian Stanfill, and Brett Younker opened the gathering with songs from recent years like “Take it All” and “God of Angel Armies.” The band also introduced new songs, soon to be released on this year’s Passion album.

Atlanta-based pastor of Passion City Church and Founder of the Passion movement, Louie Giglio, then took the stage. Giglio shared a message on the depth of the meaning of Jesus Christ’s final word on the cross, “Tetelestai,” which in Greek means “It is finished.”

Passion’s Saturday night session at 7 p.m. is available to everyone via livestream at http://268generation.com/passion2015. 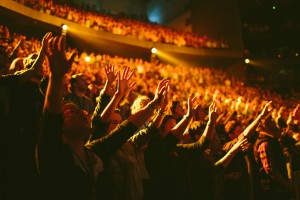 Passion Conferences have been uniting college students around the world for the past 18 years, hosting 50 events in 16 countries. Registered attendees for the three Passion Conferences in 2015 represent more than 1,000 universities and 41 different countries. The three events are being held at the Philips Arena in Atlanta on Jan. 2-4 and Jan. 16-18 and in Houston at the Toyota Center on Jan. 30-Feb. 1. It takes more than 1,000 volunteers to pull off each event, a massive donation of time by individuals from across the globe.