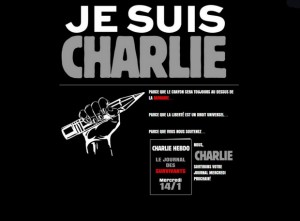 Screen shot of the Charlie Hebdo Web site,
the target of the shootings in Paris.

France (MNN) — The world watched in horror last week as Islamic extremists shot and killed 12 people at the Charlie Hebdo newspaper offices in Paris, France. The reason for the Paris shootings? The satire magazine had published cartoons depicting Mohamed which the Islamists found insulting.

Despite being integral to the story, many news organization refuse to publish the cartoons, fearing reprisal from other extremists.

Middle East expert and Vice President of E3 Partners Tom Doyle says radical Muslims appear to be winning. “I think in a way they’re gaining ground with the press and, in a sense, evaporating the freedom of the press.”

We asked Doyle if this kind of terror is affecting the Islamization of the West? “They are making people in Europe and America adjust. It’s not coming through them convincing the West of their ideology and the theology. They’re bullying people.”

He says 8% of Muslims support Jihad and these types of attacks, but that’s nearly 150 million people.

Dolye has traveled throughout Europe and has been surprised by the response on many Christians there. He says many are “living in fear, just because there are Muslims living in their city and really hating them.”

Despite the appearance that radical Islam is winning, Doyle thinks Islam could implode. Why? “Because young people in many countries that we travel in are frustrated. They look at what is happening with the Islamists and then what’s happening in their countries, and I think Muslims globally are sending up an SOS signal.”

He says more Muslims than ever before are turning to Christ. “We just heard about a city in the Middle East, I can’t name it, where someone identified 1,100 Muslims that have come to faith in Christ just recently.”

Doyle believes Satan is using these terrorist attacks “to frighten us, or even produce hatred in us, which both stances are unbiblical when it comes to reaching out. It’s causing believers to shy way from Muslims when today we’re living in the greatest Muslim harvest of all time.”

E3 Partners isn’t slowing down their efforts. Doyle says, “We launching a new initiative into 10 unengaged people groups around the world. These are groups that have no Bibles, no churches, no believers, and probably nobody working with them.”

He says E3 needs help. “We’re training and sending teams into these areas to prayer walk, to find a person of peace, to reach out them with the Gospel, and hopefully churches will be planted.”

You can find out more here: http://www.e3partners.org, or you can follow specific prayer needs at 8-thirty-8 on Facebook.