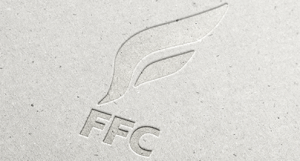 USA (MNN) — There’s more than one way to fulfill the Great Commission. Sometimes, it’s by going on a mission trip, but at other times, the mission field comes to you.

Chad and Liz LaForce founded Force for Christ Orphan Outreach (FFC) last year around a singular mission: “To enrich the lives of children globally through education, hope, and love.” This summer, FFC is focusing on the children of Eastern Europe.

The LaForce’s are looking for several Christian families in the U.S. who are willing to host Ukrainian orphans for a short period of time.

“Orphan hosting gets those orphan youth in contact with loving, prayerful families that can help them,” Chad explains.

Around 60 orphans between the ages of 6 and 17 years old are hoping this “once-in-a-lifetime” chance becomes reality before they age out of the system.

Orphan hosting is a new way of doing missions. It’s about bringing the “least of these” (orphans) to Christ-following families who have a heart for children, but can’t travel overseas.

“The government will allow agencies to bring the children over to America [for either] a summer-hosting [or] winter-hosting period,” explains co-founder Liz LaForce. 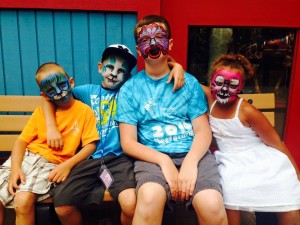 This is what summer hosting looks like: having a great time in America with a family who loves you and makes you feel like you belong!
(Photo, caption courtesy Force for Christ via Facebook)

Chad says, “The students are able to be exposed to the American culture, they learn some English language skills, and they get that broader experience that they’re not going to get living year-round in an orphanage.”

If orphan hosting is new to you, you’re not the only one. Liz says she and Chad didn’t know about it until last May, when they were introduced to orphan hosting at a spring Christians Alliance for Orphans conference.

“We brought two boys last summer from Latvia to our home,” shares Liz.

“It was just the experience of a lifetime.”

Learn how this experience led to the creation of Force for Christ.

For 4-6 weeks this summer, 60 Ukrainian orphans are hoping to become part of a loving, Christian family. It will be starkly different than the world they’re leaving behind. 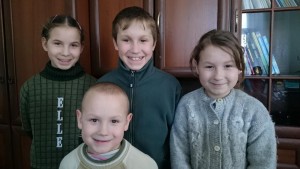 This sibling group of four would LOVE to visit America!
(Photo, caption courtesy of Force for Christ via Facebook)

“A lot of these children have never lived in a family, so it’s a new experience for them,” notes Liz.

In a Ukrainian orphanage, Chad adds, “Many of [them] are not going to experience someone who lives out the walk of Christ.”

He then shares some pretty grim statistics:

“We want to change those statistics,” Chad states.

What you can do to help

As with any Great Commission endeavor, prayer is the first priority. Ask the Lord how He wants you to be involved. Pray for those He’s called to be host families. Pray that His Truth and love will be made known to hurting orphans.

If the Lord is moving you to get involved in orphan hosting, get in touch with Chad and Liz LaForce to find out how you can help.

If you know you want to host an orphan this summer, fill out a pre-application form here. 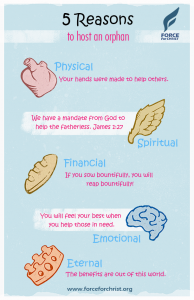 Not everyone who reads this story is called to host an orphan. But, maybe you still want to help. In that case, says Liz, donations are a HUGE help.

Bottom-line: it all requires financing. Along with handling travel logistics, FFC offers host family scholarships to help ease the financial burden of caring for another child. Host families are required to raise between $2,500 and $3,000 USD to participate in this program.

Help cover some of those costs here.

Adoption isn’t the primary focus of FFC or orphan hosting. However, some of the orphans may be eligible for adoption, and some host families may feel called to adopt.

If that’s the case, says Chad, FFC will connect families to the necessary people in Ukraine and the U.S. to get the adoption process started.