Canada (MNN) — They’re back. After a two-year hiatus, MOSES Inc. got a group of 17 people together and road-tripped to Toronto, Canada over Thanksgiving weekend in the U.S.

Why Toronto? MOSES Inc., founder and program director Judy VanderArk explains, “Toronto is a very large city; there are lots of downtown ministries, missions, food pantries, children’s ministries, and things like that. It’s usually been very easy for us to [find] ways to serve in Toronto.”

Specifically, Toronto is Canada’s largest city and is North America’s fifth-biggest, with a population of 2.7 million people. Their motto “Diversity Our Strength” also implies the cultural richness of the city, enabling it to better connect with a globalized world, capitalizing on strengths while building relationships.

VanderArk says that it’s through these relationships that they have reason to be in Canada during a U.S. holiday. “We served at a number of those inner-city ministries. One is called ‘The Lighthouse.’ The one that we primarily serve is called ‘All Nations Christian Fellowship.’ I think it’s kind of a taste of heaven when you see all these different ethnicities come together and worship God.”

Work teams didn’t focus on one specific project. Rather, they did a variety of things that helped participants understand what the ministries focused on. “We did some painting, we sorted food donation boxes, we filled the pantry shelves, got the place all tidied up. We also helped with an after-school program and helped with a kids’ church.”

In the course of learning about the inner-city, VanderArk says there’s been a shift. Downtown upgrades and gentrification have displaced the homeless population. Walking alongside The Salvation Army, the MOSES Inc. team learned why this displacement represents such a cultural shock. “It’s not easy for them to have access to the resources that was there before. They’re getting booted out to the suburbs, and the people in the suburbs don’t really know how to deal with them either.”

Plus, the team got a demonstration on what it really means to feed the hungry. VanderArk explains, “We tend to go through our pantry shelves and take out something we don’t think we’re ever going to cook and bring it to the homeless shelter or the food bank.” But what if you looked at feeding the hungry as a spiritual act of worship? Would those cast-offs still be offered? The Salvation Army facilitator noted that, “Sometimes you get oranges that are so dried out that you can’t peel them, and they don’t have any juice inside.” VanderArk took that lesson to heart. “I thought, ‘We profess to be Christians, and if we give what we don’t want to the poor, what kind of a witness is that to them?'” 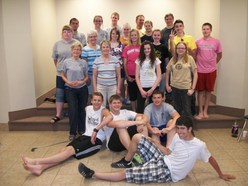 Over the course of several days, a theme emerged from this year’s Canada trip. “I think our focus is to learn and grow in our own faith, to learn from others, and to see how we can best help others,” says VanderArk. Interesting closing thoughts, considering they mirror the city’s motto in more ways than one.

Each trip has its own personality and unique takeaway. Are you interested? MOSES Inc. is structured as a peer ministry. These economical trips are run by student leaders who serve as either Team Shepherds or Team Directors. Leadership training is included in the trip. Teams are forming now for 2015. “Our next major trip will be high school Spring Break, April 2-11, and will go to rural Mississippi.” Click here for details about how you can get started.