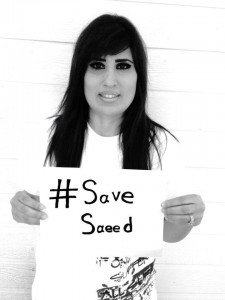 USA (MNN) — [EDITOR’S NOTE: We’re sharing the following report from ACLJ’s Web site, with a few adjustments made for clarification.]

With a U.S. citizen wrongfully imprisoned and our government seated at the table with Iran, President Obama should meet with Pastor Saeed’s wife, Naghmeh.

For nearly two and a half years, Pastor Saeed, a U.S. citizen, has suffered in an Iranian prison merely because of his faith. While we are thankful that President Obama has raised Pastor Saeed’s case with Iran’s President Rouhani, and Obama Administration officials have called for his release, the President of the United States himself has never reached out to Pastor Saeed’s wife, Naghmeh.

Now, President Obama is traveling directly to Pastor Saeed’s hometown. Naghmeh is writing President Obama asking him to meet with her, to discuss what the U.S. has and will do for Pastor Saeed’s freedom, to know that this Administration has made this U.S. citizen whose human rights are being violated on a daily basis a priority.

As she writes in her letter:

My heart leapt with hope when I heard that you would be visiting my hometown of Boise, Idaho. Since the Iranian government took my husband, Saeed Abedini, almost 3 years ago, I have been praying and wanting to meet with you. With each of my travels to Washington D.C., I hoped that I would get a call, or an invitation to see you and to speak with you: to have you look into my eyes and see the piercing pain that has been there since my husband’s imprisonment; to see my kids and to know that they have missed the warm embrace of their dad for nearly three years. . . .

Serving as President of the United States, you have pledged to protect America, to protect our citizens. My husband loves this country: so much so, he became a U.S. citizen on March 11, 2010. The following day he shared on Facebook these words: “Today is the first day I opened my eyes as an American. . . . I need to be an active citizen for my new country. Lord, help me to do Your will in my country America. Lord, Bless America.”

You speak about the need to protect religious freedom and human rights. Saeed is imprisoned merely because of his Christian faith. My husband has committed no crime. He chose to exercise his God-given right to choose his own faith. . . .

Mr. President, my children and I respectfully request, as you come to our home town of Boise, Idaho, that you take a moment of your time to meet with us.

We’re joining Naghmeh in urging President Obama to take a few minutes to meet with her while he is visiting Pastor Saeed’s hometown.

Mr. President,
On Wednesday, January 21, you are scheduled to go to Boise, Idaho. Boise is Pastor Saeed Abedini’s hometown.

As you know, Pastor Saeed is an American citizen, imprisoned in Iran merely because of his Christian faith. You have publicly called for his release, and your State Department has engaged Iranian diplomats requesting that he be freed. For those actions, we are deeply grateful.

Yet he remains in prison, and there are public reports that the United States may reach a nuclear deal with Iran without securing the release of Americans held captive in that country.

When you are in Boise, we request that you take a few minutes from your schedule to meet with Pastor Saeed’s wife, Naghmeh, so that she may make a personal appeal for her husband. After enduring years of fear and uncertainty, she deserves to be heard.

We [have asked] thousands of Americans to join with us and stand with Pastor Saeed and his wife, Naghmeh, and sign our letter to President Obama. The letter has already been submitted, but it’s not too late to be a voice for Pastor Abedini and his family.

Join hundreds of thousands of Americans, and sign our petition to not leave Pastor Saeed behind at BeHeardProject.com