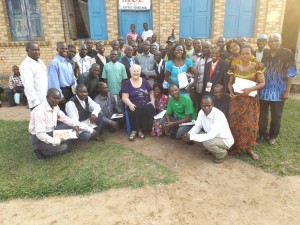 Some of the graduates of ECM’s training program in the Congo. (Photo courtesy of Lorella Rouster/ECM)

DR Congo (MNN) — Everyone has had a time in their life where they’ve felt overworked, underappreciated, and all alone. When this happens as you pursue God’s calling, it can be especially discouraging.

Every Child Ministries has operated an African Leadership Training Center at Mission Garazene in the Bandundu Province of Congo since 1991.

Over the years, many trainers have graduated and moved out into the mission field to train teachers how to start Sunday Schools. ECM isn’t just training teachers: they’re training teachers of teachers. Read more about that here.

Lorella Rouster, co-founder of ECM, says, “Leadership training is vital in all nations, but especially in a nation like Congo. Our teacher-trainers who are leaders in the area of Christian education recently learned that they were not nearly as alone as they thought they were.”

They learned this at the first-ever reunion ECM held for their trainers and staff recently. ECM invited 70 graduates of the African Leadership Training Center, and about 55 showed up.

The reunion was a time of revelation that these leaders were, in fact, never alone in their work.

Rouster explains why it is so hard to realize that. “Communication is very, very difficult in Congo.” There is no internet, phone service is spotty, and many places are without electricity.

Most of these leaders don’t have a means of traveling in Congo, which is three times the size of Texas with very poor infrastructure. If these trainers have to go somewhere, they walk to a main road (which is a two-lane dirt path) and hope to catch a ride with a commercial truck.

“Under those circumstances, you can feel very much alone. You don’t have much contact with others. Others have graduated from the same training you have, but you have never met them. It’s hard–it’s impossible, really–for us to keep in touch with all these people. There’s no postal service, no door-to-door,” Rouster says.

Most of the trainers have never met each other, and until this reunion, they had no idea they were part of such a large group.

“It’s tremendously discouraging because there might be a lot going on, but you just don’t know. You have no contact with others to really know what’s going on or to feel supported, to feel that you’re a part of a group.”

But through a special gift, ECM was able to pay for the transportation of these leaders so they could know that they are indeed a part of a group of people just as passionate as they.

The first day of the reunion, the group was interrupted by the arrival of the rainy season. The unlit room became dark with the storm, and hearing became impossible as the rain pounded on the roof.

The group began to pray. “The African style of prayer is that everyone prays at once,” Rouster explains. They prayed for 15 minutes, and the weather cleared up so they could go on with the training.

Rouster says she was very encouraged to hear the reports of the people they haven’t seen for years.

They learned that 365 new Sunday Schools had been started that they previously knew nothing about. That number pushed ECM’s total to over 3,000 Sunday schools. 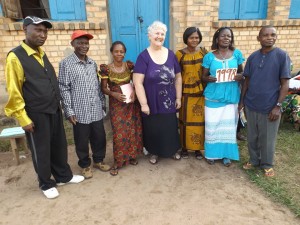 Now, Rouster says, “The people have gone back to their own areas, but they have gone back with great encouragement. And some of them we’ve been able to establish contact with.”

This type of encouragement–to know that you are not alone in your work for God–is very necessary.

“We really believe this is important for the spread of the Gospel, because as we encourage and strengthen leaders, they not only will lead more people to Jesus but they’ll train other teachers who will be giving out the Gospel regularly to children and youth every week of the year. We believe more will be done because of the encouragement that they received,” Rouster says.

How should we pray for ECM as they as move forward? “They can be praying that as these trainers go back, their enthusiasm will not diminish. Be praying that the Holy Spirit would continue to encourage them and to strengthen all of God’s workers who might feel alone and are trying to be faithful under very difficult circumstances.”

Click here to contact ECM if you are interested in partnering with any of these leaders in the Congo who have great vision and determination, but often not the financial means to accomplish their goals.