In fact, 60,000 Lake Chad residents were told be gone by Monday, according to a statement released by the governor of Diffa. Todd Nettleton, a spokesman for the Voice of the Martyrs USA, says, “This governor is taking the threat very seriously, not putting a lot of confidence in the ability of the Niger military to respond or to keep them [Boko Haram] away.”

The danger? Location. “It’s a very strategic point because it’s close to all of those countries in the middle of the lake there. So, if they control those islands, or if they have a haven on those islands, they potentially could launch attacks into any of those countries.” Lake Chad sits in Central Africa, connecting Niger, Nigeria, Chad, and Cameroon.

Boko Haram/ISWAP may also be responding to a shift in the political climate in Nigeria, Nettleton observes. First, there have been significant military victories by a four-country coalition in winning back territory from the terrorist group in northern Nigeria.

Second, “A new president has just been elected in Nigeria. He has made dealing with Boko Haram one of his top campaign promises. He will be inaugurated on May 29.” President-elect Muhammadu Buhari was a military strongman who orchestrated a coup d’état in 1983. Because of that, Nettleton says, “I think there’s the potential that they could be forced out of Nigeria and could be looking for a fallback position including these islands in Lake Chad, including some of these surrounding nations as well. It will be very interesting to see what happens militarily once the new president takes power in Nigeria.”

Already, Boko Haram/ISWAP has been testing the boundaries. In recent months, Nigerien towns on the border with Nigeria have been rocked by multiple attacks by the Boko Haram militant group. The country has also absorbed nearly 87,000 refugees since 2013, further stretching resources that are already in limited supply. 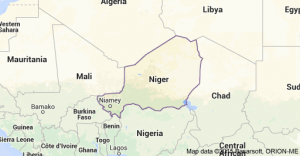 Nettleton lays out some of their concerns regarding Niger. While it’s not a place with a long history of persecution, activity has been growing. You may remember back in January 2015, Islamic protestors rioted in solidarity with the Islamists who claimed responsibility for the Charlie Hebdo attack in Paris. The satirical magazine had published a cartoon depicting the Prophet Mohammad. Islamists connected to the Yemen cell of al-Qaeda attacked the offices and killed most of the staff. The subsequent outrage about the cartoon spread to Russia, Niger, and Pakistan, as well as to other nations with large Muslim populations.

When the smoke finally cleared after two days of mob violence in Niger, more than 45 churches, homes, and other Christian property had been looted and burned. The problem: nobody knows if that will continue on under the encouragement of Boko Haram/ISWAP’s encroaching ideology. “Christians are sort of in their target group, even if they’re not the main target. So, if there are Christians on these islands, they certainly would know that if Boko Haram takes over, it would not be good for them,” explains Nettleton.