Kenya (MNN) — In mid-June, dozens of extremists attacked a coastal town in Kenya for hours, killing those who weren’t Muslim and those who didn’t know the Somali language.

Even as the ruins lay smoking, al-Shabaab claimed responsibility for the vicious attack. David Shibley with Global Advance says, “In recent months, there has been a very pronounced spike in persecution against believers by radicalized Islamic groups, particularly in the coastal region city of Mombasa.” The radicals promised more to come, too. The coast and northwest areas of the country have traditionally been Muslim, and Muslims are attempting to Islamize those regions and establish Sharia law.

Yet Kenyans, by law, have freedom of religion. Voice of the Martyrs Canada reports nearly half of the population identifies as evangelical Christian. With the threat of the radicals on their doorstep, a new word has been introduced into the local vocabulary: apostate. Converts from Islam to Christianity are subject to harassment, persecution, and violence. Shibley says, “Christians have been threatened, some have been physically harassed and abused, churches have been burned; so pastors were very much in need of encouragement at this time.”

Global Advance began making preparations to answer the call in August, says Shibley. However, with destruction of the June attack still visible, last-minute changes were made. “We had intended to have the conference originally in the city of Mombasa. [But] the council of our Kenyan brothers felt that it might be a bit too dangerous to assemble that many pastors together at that time.” 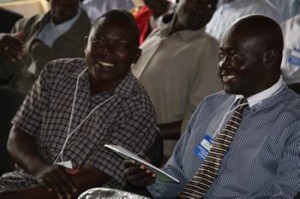 Logistically, it was an answer to prayer. Global Advanced moved everything to safety. “We brought them out to a safer city, a couple of hours inland, and also invited the pastors of that particular region. Altogether, 110 senior pastors came to that wonderful Frontline Shepherd’s Conference event.”

Relieved of the constant threat, the church leaders were free to rest, adds Shibley. “It was a tremendous time of bonding, refreshing, strengthening, deep in their inner person. They left with a fresh resolve to once again be lovingly courageous in proclaiming the Gospel.”

It was a timely intervention, too. “There was a marvelous window of opportunity with many disillusioned people in those areas, so we need to be praying for courageous brothers and sisters who are boldly and lovingly sharing the love of God in Christ.”

Here’s what’s interesting: even though Global Advance was equipping the church leaders through a Frontline Shepherd’s Conference, it was the teaching team that learned a few lessons in those two days. First, they learned firsthand what boldness looks like. “When we were told that the area where we would be staying for several nights had also come under threats from radicalized groups, their response was simply, “As always, we will trust God.” This boldness was accompanied by grateful hearts, so there was absolutely no complaining about the opposition they face from al-Shabaab. Lastly, says Shibley, he saw resilience that comes from the peace that passes understanding. All told, “We, in the Western Church, need to learn from our brothers and sisters in the majority world simply to trust God and to trust His faithfulness to us.”

Even as these pastors move forward in areas that are regularly attacked by terrorists, they’re only asking the body of Christ to pray this way: “Pray for a real resurgence in evangelism and response to the Gospel.”

Shibley adds a request for this month’s plans. “Global Advance is going to be involved in September in 10 training events in nine nations of the world. We’re very, very grateful for that opportunity, but with the pronounced spike in persecution against believers in much of the world, we at Global Advance certainly need prayer as well that our teams will be protected, and that the Word of the Lord will run swiftly.”