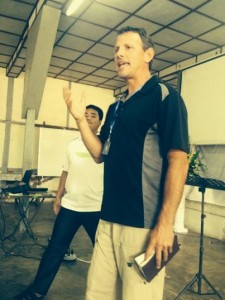 Myanmar (MNN) — Despite Myanmar’s (formerly Burma) recent transition to democracy, Christians in the area are lumped in with the ethnic minorities.

As a result, they are being purged from the borders. Christian minority groups–particularly the Karen and Chin ethnic groups–are singled out for the harshest treatment. In the last 10 years, notes the Voice of the Martyrs USA, more than 3,000 Christian villages have been burned down.

According to Open Doors USA, being Burmese is synonymous with being Buddhist, and anyone who departs from the norm is often ostracized.

That’s the backdrop to the following story.

The Treasure is World Mission’s field-tested digital audio Bible. The unit, which is small enough to fit in a palm, has a built in solar panel with rechargeable batteries. World Mission CEO Greg Kelley shared the simple story of a 30-year-old Buddhist woman he met while in Myanmar.

“She listened to this Treasure for two months, and after listening to the Word of God, was convinced that Jesus was, in fact, the Messiah. He was who He said He was. She went to our national pastor and asked him how she could become a Christian. He led her to Christ. Upon hearing the news, her husband told her she had a choice to make: either she could choose him and their Buddhist religion, or she could choose Christianity. She said, ‘I’m following Jesus. He is my Lord and Savior now.’ Here she is, essentially a widow, serving Jesus, left with nothing but has the joy of the Lord like I’ve never seen anywhere in the world.”

World Mission is providing access to the Word of God, hope for tomorrow, and help for today. Ask God to come alongside this new believer and her child and provide for their needs. Pray that the Word of the Lord will settle deep into the hearts of the hearers and that lives will be changed.