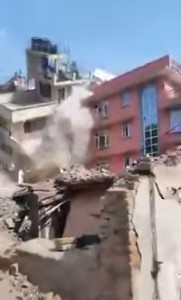 Screen shot from
Robindra Basnet’s video on Facebook showing the May 13, 2015 earthquake in Nepal. Watch full video below.

Nepal (MNN) — Nepalese are afraid to go inside any building. For the second time in less than three weeks, Nepal was shaken by a 7.3 magnitude earthquake, leaving many dead and hundreds more injured. The epicenter, this time, located near Mount Everest, took down buildings already shaken by the April 25 quake.

President of Asian Access Joe Handley says, “The reports fresh from the field [are] that there’s just a great deal of fear. People are in buildings that aren’t very solid, and so they’ve raced outside. Everyone is trying to get into the open air, or in a tent in Kathmandu.”

The earthquake is shaking the faith of many Hindus in this predominately-Hindu nation. Garnesh Pradhan told USA Today, “Not only Hundu[ism] I left, [but] all the gods I left.”

What does that mean for groups like Asian Access? “People are grappling with ‘How do the gods that I serve allow something so tragic to occur?’ Pastors are well-equipped to handle the spiritual side of things,” says Handley. “They’re also often the best when it comes to emotional care.”

(Listen to the whole interview here)

According to Handley, these uncertain times are laying the groundwork for churches to provide tangible aid. “We’re trying to mobilize aid to probably about 30 churches that are right in the middle of the worst-hit areas, to be a point of light in these neighborhoods.”

Pastors and motivated Christians are reaching out with emergency aid as well as with the message of the Gospel.

Thirty year ago there were hardly any Christians in Nepal. “The Christian population is small but has been growing for the past 30 years,” says Handley. “In fact, they say it’s the fastest-growing church on planet Earth during these three decades.”

As you support churches in Nepal, you’re helping the church have more credibility in a nation that used to oppress Christians.

Unfortunately, there’s a problem. Handley explains, “The giving globally isn’t keeping up with the massive needs on the ground. So, we’re just praying that Christians will respond.”

The United Nations reports they’ve only received $20 million in emergency aid support in their $110 million goal. Other groups are finding similar response.