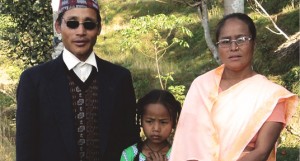 Nepal (MNN/GFA) — Death and sickness stalked him like a plague. No matter how hard he tried, he just couldn’t escape it. But then he found hope.

When Ekagrah was a teenager, his mother and seven siblings died within a short time period. He dropped out of school and left home for five years in search for work so he could support what remained of his family.

Some time later, the stalker returned. After Ekagrah’s wife, Geetika, had the couple’s first child, his wife and newborn daughter became seriously ill. Geetika developed a strong burning sensation, while her daughter experienced vomiting and a fever. So Ekagrah did what his mother had always done–appeal to the gods. But Ekagrah became angry and stopped worshipping them after they, the witch doctors, and medical doctors proved futile.

It wasn’t until after five years of watching his family suffer that Ekagrah found hope. His niece and nephew presented the Gospel to him for the first time in his life, and after going to church with them, he immediately found peace.

But it wasn’t just Ekagrah that the service affected. Though Geetika had no idea of her husband’s whereabouts, she began feeling physical relief. The next week as Ekagrah was about to leave, she demanded he tell her where he was going. When he told her, she immediately acknowledged God as the one worthy of her worship and the one who would heal her. 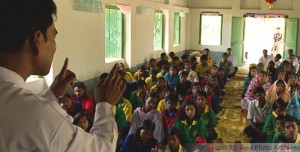 Their passion for the Lord skyrocketed from there. The family began attending church regularly and soon gave their lives to Christ. Shortly thereafter, God completely healed Ekagrah’s wife and daughter.

Soon, Ekagrah and his family began feeling called to take the next step. They decided to take Bible training courses and become missionaries, despite being demanded by relatives and friends to renounce their faith. After several years of serving the Lord, they came in contact with Gospel for Asia. They soon packed up and moved to a remote village in central Nepal.

Upon arriving, they didn’t receive the welcome they had hoped for. The villagers threatened them and demanded they leave, but that didn’t impede them. They persevered, prayed and fasted, and soon, three people came to Christ.

Over the last 10 years, the family has continued to build relationships with those in his community, while Ekagrah regularly preaches in four of the surrounding villages. God is blessing his faithfulness: he started a small church that dozens of villagers attend every week.

Can you help missionaries like Ekagrah working in Nepal? Here are some ways you can make an impact: