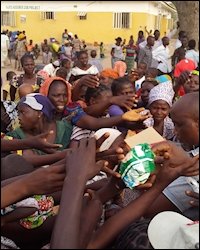 Nigeria (MNN) — In Nigeria and neighboring countries, the amount of displaced children has nearly doubled in the last year. According to a UNICEF report, more than 800,000 children have fled their homes because of the violence and terror of Boko Haram.

The rapid increase in IDPs is affecting refugee and IDP camps, which have become overcrowded, unsanitary, and under-supplied. Not one person has enough to eat or drink.

Indigenous missionaries supported by Christian Aid Mission are asking for food, medicine, Bibles, and clothes for at least 1,000 people, and shoes and socks for at least 500 children. They are supporting 30,000 people in an IDP camp. You can help their cause by clicking here and going to May 4.

The influx of IDPs in camps doesn’t seem like it will slow down anytime soon. Last year, an Internal Displaced Monitoring Centre report stated 470,500 people had been displaced in Nigeria in 2013 alone. In 2014, 250,000 more fled their homes. Currently, there are about 1,500,000 IDPs in Nigeria.

It’s not just those fleeing who are adding to the population of the camps, either. Recently, Nigerian soldiers freed nearly 300 women and children from Boko Haram. ITV News reported they came from Sambisa Forest, where the Nigerian military had rescued nearly 700 more women and girls, and destroyed more than a dozen militant camps in the week.

Every day, more women and children are being rescued. Though celebratory news, these victims have lost their homes and all their belongings in the violence and chaos. They are now turning to refugee camps for help. Unfortunately, this help is limited and already at the breaking point.

Christian Aid Mission is trying to restore hope by helping their indigenous partners meet physical needs, pray with hurting families, and talk to believers and non-believers about the love of Christ. One refugee who came to Christ said to Christian Aid Mission last year, “We are strangers to you, yet your concern is greater for us than our own government that collects our taxes.”

Pray For:
• Many refugees to come to Christ and find eternal hope in Him.
• More resources for indigenous missionaries to distribute in the name of Christ.
• Many more to be saved from Boko Haram.