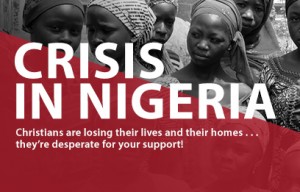 Nigeria (ODM) — [Editor’s Note: Rejoice with us over this amazing report from Open Doors.] When Rahila’s bus stopped in the town of Dutsen Kura in northeastern Nigeria, she knew she was in trouble. Boko Haram terrorists grabbed her and took her to one of their camps. In the camp they told Rahila, whose husband earlier was killed by Boko Haram, she “would be slaughtered like an animal” if she didn’t renounce Christ and turn to Islam.

Her faith and her hope to one day be reunited with her three little children kept her alive. She devised a plan to escape from her captors

She convinced the person in charge of her that she would collect her children and then return to the camp. Her plan worked. She escaped but almost died on the way to a refugee camp due to food poisoning. It was so severe, she needed a blood transfusion. Open Doors USA was able to help her with medicines and medical care.

Open Doors rejoices with Rahila in the Lord’s deliverance but knows that there are thousands of other women, men, and children who remain trapped in Boko Haram camps. Pray for the Lord to bring deliverance to them, too.

As the military, along with the help of a multi-national force, continues to liberate some towns held by Boko Haram, the devastation the terrorists have caused is overwhelming. The Islamic militants have slaughtered people, kidnapped thousands, and ruled those trapped in captured towns through fear.

An Open Doors worker in West Africa said: “The emotional impact on the people of Nigeria is unimaginable, and the government is ill-equipped to deal with its magnitude. The aftermath of this crisis will offer the Church one of her biggest opportunities, but also one of her biggest challenges to be instruments of healing in the hands of the Lord.

“Open Doors, over many years of involvement in northern Nigeria, has worked to prepare and equip Christians for dynamic ministry in times such as these. Pray that the local and international Body of Christ will be able to rise to this occasion through practical and emotional help and through prayer for the many traumatized people.”

Open Doors partners with the local church to strengthen, support, equip, and provide assistance in northern Nigeria through such programs as Bible distribution, training seminars, assistance to Christian schools, emergency support, trauma counseling, legal assistance, and implementation of socio-economic projects for new believers and widows of Christian leaders who have been killed.

If you’d like to help or provide supplies for refugees, you can donate here.

Nigeria is ranked #10 on the Open Doors 2015 World Watch List of the worst persecutors of Christians.