International (FH/MNN) — The following is a reflection on life for child refugees. Do children have a childhood in a refugee camp? What does the word “home” even mean?

Food for the Hungry reports:

There is a longing inside each one of us to go home. Whether it is a child away at camp or visiting grandma, or an adult on vacation or away on business, or a young soldier off to serve at a distant post, our hearts long to return to home. 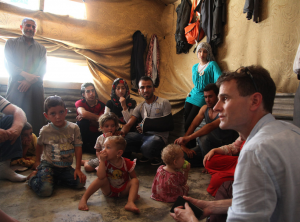 (Photo courtesy of Food for the Hungry)

Worldwide, more than 3 million people are homeless at some time during any given year. The UN High Commission for Refugees reported in June 2014 that the number of people worldwide who will not get to go home at night has exceeded 50 million for the first time since World War II. Over 51.2 million people are refugees, people seeking asylum, or internally displaced persons (IDP).

The conflict in Syria alone has created a situation where 9 million people have little hope of going home in the foreseeable future. In just five years, Syria has gone from being the country hosting the second-largest number of refugees to producing the second-largest number of them. Imagine, if you will, millions of children crying in their mothers’ arms at night, “Mommy, when can we go home?” But all those mothers can do is tenderly hold their children and ask the same question silently in their own hearts.

Counting refugees only, Syria and Afghanistan have produced 5 million combined, with Iraq adding another 400,000. Keep in mind that the UN report was published prior to the rise of ISIS in Iraq. By now, the refugee count is well over 6 million. So, where have they gone?

They have crossed borders into the neighboring Middle East countries, with hundreds of thousands escaping to camps in Iran, Lebanon, Jordan, Turkey, Yemen, Egypt, and other countries that are, themselves, ill-equipped to shelter, feed, and provide the basis necessities of life for so many.

Like the 6.5 million IDPs, the 6 million refugees have escaped one desperate situation only to find themselves in another. We want to believe that people who have become refugees are safe. They are not. They may have escaped the scourge of the fighting, but now they face the test of surviving, often living in tents or other makeshift structures and having no source of providing for themselves. They must place themselves at the mercy of the countries that have taken them in, while millions of children cry, “Mommy, when can we go home?” And still, there is no answer.

There is a huge gap between what the host countries can do for the burgeoning numbers of refugees and what those refugees need to survive. That’s why Food for the Hungry (FH) and many other NGOs and faith-based organizations exist. We can fill that void by reaching out in a Christ-like manner, showing compassion, and providing essentials the rest of the world takes for granted. By providing assistance like education for refugee children, we can give them a sense of structure in their lives and prevent the long-term crisis of another generation of uneducated adults. Perhaps, by doing what we do, we can help some of these refugee children feel enough sense of security to feel at home with their parents at night, instead of crying in their arms, asking, “Mommy, when can we go home?”

Through their local NGO, FH is actively providing ongoing relief to refugee families in Syria and Lebanon. Would you consider praying for these families and for FH, and helping them to provide for their needs? Read Press Release. Advocate. Give.