Int’l (MNN) — Missionaries traditionally have been viewed as benevolent, strong persons who cross barriers of culture and language to bring the lifesaving message of the Gospel of Jesus. And, most of the time, this is true.

We often forget, however, the hard work that it takes not only for the missionary to establish their mission field but also to deal with the daily stresses and deeper tragedies they face. We forget all the threats facing their calling.

Darlene Jerome of Wycliffe Bible Translators USA says the organization partnered with many others in order to establish the Mobile Member Care Team (MMCT), an organization that addresses the needs of missionaries around the world. The organization has recently been planting seeds in more hostile areas of the world including North Africa, the Middle East, and Central Asia.

Jerome says, “In the late 90s, several missions, including Wycliffe, were sensing the need for there to be a service that would help with crisis response for missionaries.”

The response to this was MMCT. In the past, says Jerome, missionaries were often left out of political and cultural violence. Now, “Missionaries are often targets these days.”

Research in the last decade has shown a severe difference between the life experiences in the United States and for those in missions.

MMCT began in west Africa and expanded into east Africa.

“As you see on the news, there’s often political unrest in Africa, and we can get caught up in the middle of that,” Jerome says, explaining the types of situations missionaries face in Africa. She says trauma includes violence that calls for evacuations, armed robbery and assault, kidnappings, car jacking–and the list goes on.

MMCT is there to listen and help coach missionaries through these hard times. They also express the importance of training peers to respond to situations immediately. This is necessary, Jerome says, because their small team cannot walk through every situation with the number of missionaries they serve. 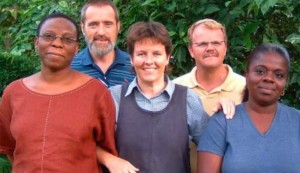 These trained peers become “first aid” responders, available for their community of missionaries. They can help assess the situation, and if higher leadership is needed, they get back to the leadership of MMCT.

The violence that continues to grow worldwide is a major reason MMCT desires to expand their reach.

“One of the primary things we do is to train people,” Jerome says, “We train leaders and we train peers…. But right now, there are a lot of leaders in missions in those three regions who are trying to make decisions about whether to keep people in places or maybe to withdraw certain categories of people; and those are tough decisions.”

The decision is difficult because of the time and commitment it took to place a missionary initially. They’ve very likely had to learn the language, adapt to the culture, or at the very least, establish relationships with the community. But missionary leaders don’t want to put their missionaries to risk.

Some of the training leaders receive to address these questions involves theology of risk, and assessing stress levels. They also encourage leaders to establish trusting relationships so when tough decisions are made, people are willing to follow.

Jerome explains that in recent times, there has been attrition in missions. Many times, missionaries give up due to preventable stress and inability to cope with some of the things they’ve dealt with.

“If there’s anything we can do to help people be resilient and keep going,” Jerome says, “that’s what we want to see happen. That’s the big picture, in my mind, to be able to keep people in place as long as it’s possible.”

MMCT isn’t just to keep missionaries surviving, however. Jerome says, “Our vision: resilient communities of cross-cultural workers caring for each other and equipping them to thrive in the midst of life’s challenges, of the traumas that they’re encountering.”

We can all give a hand

Jerome encourages you to pray for missionaries you know who are in difficult situations.

“It’s a tough time for mission leaders right now in those regions, that’s for sure. They need our prayers,” she says. Pray for them to be connected in a loving and caring community of believers. Pray that these connections will help sustain them when trouble comes.

If you are someone involved with counseling, trauma consulting, pastoral care, and any related sort of training, you may be able to become a part of the MMCT team. If you feel called, contact Wycliffe Bible Translators here.

You can also help sponsor missionaries so they can attend workshops with MMCT. If you’re interested, click here.

Jerome says in closing, “We just feel tremendously privileged to come alongside missionaries in tough spots. They are special, special people. They need our prayers, they need our help.

“When you see the news come across, let that be a prompt to pray for them. They are there–you might not even know they’re there. Many of them are there, kind of undercover. But they are there in all these countries you’re seeing on the news. So pray for them and their communities that they could stay strong and be strong and courageous in the Lord.”