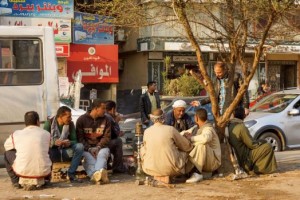 Egypt (MNN) — [EDITOR’S NOTE: This is an article written by Nicole James, a freelance journalist and an intern with Operation Mobilization. Click here to find other ways OM is spreading the Gospel around the world.]

“It is the same with my word. I send it out, and it always produces fruit. It will accomplish all I want it to, and it will prosper everywhere I send it” (Isaiah 55:11 NLT).

*Ali, a local worker, has one goal for his life: to wash Egypt with the Word of God. Before 2017, he hopes to distribute 2 million Bibles to Egyptian Muslims. He hands out Bibles by the carton-full, according to team leader *Jared.

“Ali is not afraid in any situation to offer a Bible as a gift,” Jared said. Often, when one family member receives a Bible, other relatives come back to ask for their own copy.

A couple of times a year, Ali and *Ibrahim, another OM worker, partner with a local ministry. In a courtyard, event volunteers set up displays of used clothing to sell. When a local leaves the event, they receive a Bible.

One day, 2 girls entered the courtyard and silently perused the area. On their way out, they both accepted a Bible. Some time later, both returned to the center, having read through the Bible and come to faith.

Another day, a Muslim lady wearing a full burka came into the area. One of the volunteers, standing next to the doorway, handed her the Bible as she entered. She accepted the book, hugged it tightly to herself, and said, “I don’t need anything else.”

“Incredible things are happening in Egypt these days,” Ali reported. “We’re praying that the Word of God will go across [the country].”

Since the Egyptian revolution in 2011, Bible distribution within the country has increased every year. There was “an incredible response to the Gospel from the backlash when the Muslim Brotherhood was running the country,” Jared explained. “[Many] people rejected that form of Islam. They’re exploring many different areas, but many are coming to Christianity.”

OM workers are spreading God’s Word across Egypt’s social strata–from politicians to people off the street.

However, the openness experienced by the OM team in Egypt may not last. “We don’t know what will happen in a year or two,” Jared said.

Pray that OM workers in Egypt will continue to find ways to distribute Bibles across the country. Pray that many Egyptians will read God’s Word and come to faith in Jesus Christ.