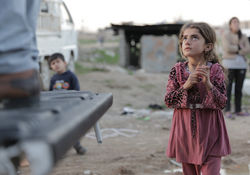 Iraq (OM) — [EDITORS NOTE: This is a feature story by Nicole James, an internationally published freelance journalist after visiting the OM Near East Field with a Transformation team and writing multiple features for Operation Mobilization.]

In the spring of 2014, ministry in Kurdistan, northern Iraq, was rushing forward. Business was brisk, local churches were reaching out to Syrian refugees, and summer seemed promising. Then, in June 2014, instead of the expected tourists, ISIS arrived in Mosul, Iraq.

Life changed almost instantly for Tim* and Lena*, long-term OM workers in Kurdistan. Rather than focusing on their work and ministry, they found themselves overseeing relief among internally displaced peoples (IDPs)–thousands of people chased from their cities by extreme Islamists, needing shelter ahead of impending weather conditions.

The couple planned to leave for another area with local friends if ISIS came too close, but through prayer, the Lord clearly confirmed that they were supposed to stay in Kurdistan as the crisis unfolded.

“If you’re called to the people, you cannot run away from them, especially in the time of need,” Tim said. “[God] gave us the peace, just knowing He is with us, to keep encouraging others and praying with others, knowing God is still there. He [had] not left us.”

Lena began coordinating efforts with the local pastor whose congregation had already been helping Syrian refugee families from the church’s own funds. At first, the church wanted to expand its relief efforts to include the internally displaced peoples arriving in their city: mainly Christians and Yazidis, a religious minority targeted by ISIS. However, recognizing the ever-increasing scope of the need and having received funding offers from outside NGOs and churches, Lena stepped in to organise additional support.

“Everything was so chaotic,” she remembered. “I was corresponding with donors, reporting, getting pictures and figures, and trying to get an idea of what was needed.”

Over the next few months, OM sent additional workers to Kurdistan for short trips, all continuing to assess the situation and set up a system for distributing aid.

“It’s been a challenging time. We need wisdom, strength, and guidance. Everything is so fresh now, so turned over,” Tim shared.

Right now, Kurdistan is in the spotlight worldwide–in the news and also in churches.

“People are praying, and we see that,” Tim recognized. “Kurdish people have been [seemingly] forgotten for many centuries….Prayer will be key to make a difference among the Kurds. We pray that God will do a miracle.”

Lena added, “It’s a crucial time, because minorities are being displaced, and not just Christian minorities. It’s an opportunity for [Muslims] to question Islam and ask why this is happening. We need the Holy Spirit to work in their hearts.”