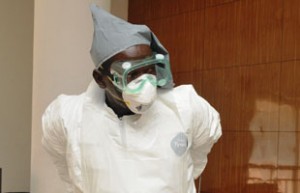 Liberia (MNN) — The Ebola epidemic sweeping West Africa is “out of control,” according to Doctors Without Borders. The deadly virus is concentrated in Guinea, Liberia, and Sierra Leone, but there are concerns that hundreds who are unknowingly infected could be spreading the deadly virus even farther.

The disease has a fatality rate of nearly 90% in an outbreak that has killed more than 670 people in West Africa–the largest ever recorded, according to World Health Organization reports. It’s an incurable disease that’s spread through contact, so medical care workers are at high-risk of contracting the disease.

Reach Beyond regional director of Sub-Saharan Africa, Lee Sonius, confirms the latest reports. “I think the worst thing about Ebola is how highly contagious it is. It can be passed even from sweat. The hope that you can somehow bring the cases down all has to do with containment.”

One of Liberia’s most high-profile doctors has died of Ebola, and on 26 July, the ELWA medical team said they were dealing with it personally: “The missionaries that have tested positive just in the last few days are working at ELWA Hospital in conjunction with Samaritan’s Purse.”

Nancy Writebol serves with SIM in Liberia and was part of the joint SIM/Samaritan’s Purse team treating Ebola patients at the Case Management Center in Monrovia. She tested positive for the Ebola virus and is also undergoing treatment at the isolation center at ELWA. Mrs. Writebol is married with two children.

Although the mortality rate is high, 10% of those who contract the virus DO survive. Sonius explains, “There’s a much higher chance of survival if you are diagnosed very early. Of course, they’re getting the best care that they can get there.” SIM manages ELWA Hospital in Monrovia and has partnered with Samaritan’s Purse to combat Ebola since the current outbreak began in Liberia in March. “We really need to be keeping these people there in prayer,” says Sonius. 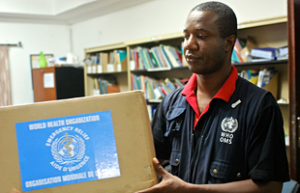 Medical operations continue at the Ebola Case Management Centers in cooperation with the Centers for Disease Control, the World Health Organization, the Liberia Ministry of Health, and other global health authorities.

Sonius explains the connection between ELWA and Reach Beyond. “ELWA has a long history of partnership with Reach Beyond, mainly because of the radio station that is located there. ELWA is the oldest missionary radio station in Africa.” Plus, Sonius has long family ties in Monrovia, Liberia.

Because Monrovia is also his hometown, Sonius has many friends and mission field ties to the area. He says that Reach Beyond is assessing how they can best help, whether it’s through fundraising or raising awareness about the crisis on a global scale. However, he notes, “To me, the key is prayer.”

Here’s how you can pray:

*Pray for peace of mind for the two colleagues currently diagnosed with Ebola infection, and pray for wisdom for those who are treating them. Pray that their treatment will be effective in arresting the disease. Pray for their families both in Liberia and in their home country that the Lord will grant them His peace.

*Pray for protection for all of the other staff members continuing to treat people suffering from Ebola.

*Pray for healing for the patients who have been admitted.

*Pray for rest and stamina for the medical team.

*Pray that people in Liberia will learn more about this illness and take proper precautions to prevent its spread.

We will keep you updated as information becomes available.