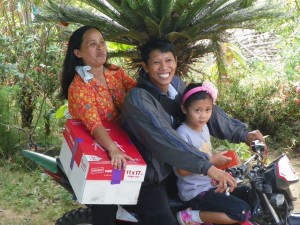 Philippines (MNN) — Pretend you have to travel hours to get to a concert you’ve been looking forward to for months. You realize that there is likelihood for you to be late. So you call up the information desk where the concert is going to be held and ask them, “Will I still get my Bible?”

Christian Resources International returned from the Philippines earlier this month. What they found was a hunger for the word of God.

During this trip, CRI held a concert/evangelistic meeting with Christian music where those in attendance would receive a free Bible. They also heard the testimony of Jason Woolford, CRI’s executive director. The meeting was held in Cuenta Astrodome. “We had 4,000 people come and get to hear the word of God preached,” Woolford says.

This was part one of their distribution of the $3 million worth of Bibles and Christian books collected and shipped to the Philippines earlier this year.

One pastor who was helping organize the concert said he received many calls, e-mails, and texts from people concerned they would not be able to get a Bible since they were late. There were no questions regarding whether or not they would still have their seat, or how close they would get to the stage!

Out of the 4,000 who heard the message of Jesus Christ, many decided to follow Him. Many more rededicated their lives to serve Him.

Woolford says, “I’ll try to be very conservative on these numbers. At least from what we could count with the lights just barely up, that we could see, were over 500 people who asked Jesus Christ into their life for the first time, and hundreds that rededicated their life to the Lord.”

The second purpose of the trip was a Pastor’s Conference. Woolford reminds us that being a pastor is hard work. “Statistics show it’s one of the fastest occupations where people feel defeated and give up and get out of that line of work, so to speak. And so we were able to speak an encouraging word–a message into their life, reminding them that God will see them through, one way or the other.”

One of the ways of giving encouragement was to provide the 700 pastors with multiple boxes of Bibles and Christian books each. These resources will help them disciple people who non-believers, new believers, and even those in seminary.

One of CRI’s partners also donated food for them to hand out to the pastors. The pastors could choose what they needed most: food or Bibles.

Woolford says every one of the pastors chose the Bibles. “It just choked me up to see that they have an understanding that ‘man shall not live by bread alone, but by every word that proceedeth out of the mouth of God.'”

It’s often the case that Christians who go to bless others are blessed by those they go serve. “I was just overwhelmed to meet these men and women of God who just were impacted by God,” Woolford says.

After Woolford shared his testimony, a man approached him. He explained that he left the ministry 8 years earlier when his 8-year-old son was shot and killed in the car by a drive-by shooter.

He stepped out of the ministry because he was angry at the situation and confused at why God would allow such a horrible thing.

“No one’s being charged for the Word of God; people are coming to be able to get it for free, and lives are going to be changed. This will be an ongoing program that we will have, and we’re so excited for it,” Woolford says.

And it goes on–with your help!

CRI stepped out into faith in order to distribute these Bibles and provide encouragement for the people of the Philippines. The financial costs, once the books were given, were immense. But CRI trusted God to provide the means to complete what He had called them to.

Woolford says, “When God calls us to do things, He doesn’t always call us to do it when everything’s in order.”

Woolford says that following God’s call even when it’s hard is to follow the Kingdom path, not the common path.

Will you help them continue this vital work? Become a book missionary with CRI: donate that extra Bible sitting on your shelf, or the Christian books you’ve already read through.

Or, you can help by contributing toward the $10,900 cost of shipping the next container of books.

Finally, watch for their video highlighting the events that took place on their trip.

Woolford leaves us with this prayer: “As you live a life for God, I know God will make a way for you. I pray that He will meet your needs in the realms spiritual, physical, and financial as you honor Him, in Jesus’ name.”