India (MNI/MNN) — Usually when you hear the phrase “seeing red,” it’s not a good thing.

This is true for Grand Rapids, Michigan-based Mission India, but there is something they can do about it.

(Maps used with permission from the International Mission Board)

“Go therefore and make disciples of every nation” (Matthew 28:19). It was a radical command to the early Church. It’s part of the Great Commission found in the Bible, and it’s the basis of what makes Mission India tick. More than 400 million people who call India home have never heard about the hope that comes from Christ.

Not only are they equipping partners to share the story of Jesus, but they’re also hearing stories of change, explains Ackerman. “Daily, we get stories of people who have been transformed by the Gospel–people who are going out into their own communities, sharing the Gospel. We just really are seeing the Holy Spirit sweeping across India in incredible ways. The Gospel is gaining momentum in India; there’s no question about that.”

Through programs like Church Planter Training, Adult Literacy Classes, and Children’s Bible Clubs, says Ackerman, “We’re starting to see some of that red changing to yellow and orange. Those numbers signify the amazing movement of the Holy Spirit as He raises up people in India to reach their own communities.”

Naturally, as India experiences a shift from red to orange to yellow, there’s backlash. Poverty, social evils, and generational slavery exist, and some people don’t want to see that change. Ackerman says, “Persecution is a big problem in India. It continues to be something that we hear about on an almost daily basis; and persecution can take a lot of forms. Persecution doesn’t just mean violence.” Sometimes, it’s not violence. Sometimes, it’s social ostracization. “People are rejected by their families, by their friends, by their neighbors.” Or, “Sometimes we hear stories of new believers who are told that they can no longer get water from the community well because they’ve abandoned their community’s faith.”

The pressure can be incredible on a new follower of Christ. But the following graphic explains why Mission India won’t give up: 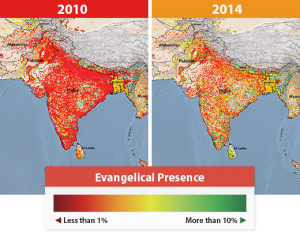 It’s hope depicted. The only thing holding Mission India back is the lack of people and resources. “We have so many opportunities right now: ministry partners literally in every corner of India. We have waiting lists, where we could be reaching more people and equipping more ministry partners.”

Striving for the day when there’s no more red, here are 5 ways you can help:

*Watch a powerful video about India’s millions of Untouchables.

*Request your free copy of the world’s unreached people groups maps (and put it up at church to spread the word).

*Read the story of Anbu, the first believer in his village.