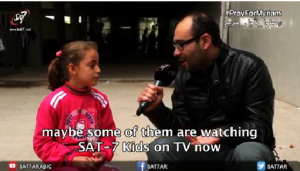 Iraq (MNN) — There are times when a young child sets an example to be followed by the older generations. This is one of those times.

Around three million people worldwide have been touched by the forgiveness and love of little Myriam, a 10-year-old Iraqi refugee who was featured on a SAT-7 ARABIC video. SAT-7 is a Christian satellite television ministry to the Middle East and North Africa.

After the video was posted on Facebook and subtitled in English, thousands shared the awe-inspiring video. In 42 hours, the video was watched 200,000 times. According to Essam Nagy, the SAT-7 worker who interviewed Myriam, it has been watched in full over 500,000 times on SAT-7’s Web site, Facebook, and YouTube channel.

In an interview on Gary Lane’s CBN blog, Nagy was asked why he thought the video went viral. He responded, “I think we need to see the truth and the light inside the darkness. Myriam is living in a very not good environment, in the sense of the world. But she…bears a lot of peace inside her. And I think every one of the people living in the Middle East and abroad would love to see this amount of hope.”

The video has been not only noticed by the Christian community, but it has also drawn the attention of mainstream Arab media, which rarely covers Christian news.

According to SAT-7, the pan-Arab broadcaster Al Arabiya said the clip had spread via social media and was impressing ordinary viewers and media commentators.

A columnist in the Lebanese newspaper, Al Nahar, said the interview with Myriam “should be presented in Lebanese schools as a lesson in humanity.”

This is not the first SAT-7 video to create a counter-shock response to the savage ISIS attacks. Following the beheading of 21 Egyptian Coptic Christians, the brother of two men who were slaughtered called SAT-7 ARABIC and told the world he did not hate the militants; instead, he loved them and forgave them.

Both responses, from the young 10-year-old girl who lost her home, to the full-grown man who lost two of his beloved brothers, are unexpected and inspiring lessons of forgiveness that reflect the love of God.

Nagy encourages prayer for refugees and others who have been severely affected by ISIS. Many do have hope, but for others, it’s hard to come by. “Pray for this kind of faith and peace to still be nurtured more and more in these people’s hearts, because they are changing the world without them even knowing how impactful their stories are.”

He adds, “I think we are witnessing God’s hand moving.”

Click here to help SAT-7 reach more people in the Middle East with the message of hope and forgiveness.