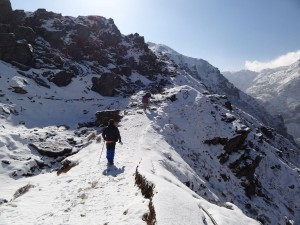 SE Asia (MNN) — It’s been a full but satisfying December for a medical missions team serving with Vision Beyond Borders. They’ve spent the past couple of weeks in Southeast Asia caring for refugees, playing with kids, and delivering Bibles to closed countries.

They’ve returned to their homes in the U.S. just in time for Christmas. As they celebrate the birth of Christ with family and friends, pray that the medical missions team takes time to reflect on their experience.

“Pray that God would continue to work His perfect plan in each of their lives to draw them closer to Him and His purposes,” asks VBB’s Dyann Romeijn.

“And then, for the Church overseas, [pray] for continued protection for them and that they will just continue to shine their light in the midst of darkness.”

Becoming the hands and feet of Christ

Whether they’re serving the Lord as short- or long-term missionaries, Christians often say they’re “called to be the hands and feet of Christ.” What this means is living out the commands of Scripture and caring for others like Jesus would if He were walking among us today. 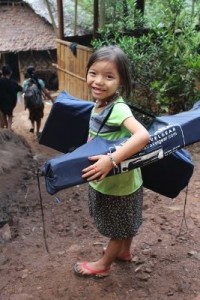 “These people are just happy to have somebody come in, check their blood pressure, give them a full physical, you know, because many of these people have never had medical care,” Romeijn notes.

“Sometimes it’s been many, many years [since] they’ve been looked at by a doctor because they don’t have money, so they’re not able to ever go in and get treatment.”

Most of the Karen people are Christian, so fellowship with the team was a great time of encouragement.

During one part of the trip, the team split up into two groups. One group of medics crossed a nearby river by boat and set up a medical clinic in one of Burma’s Karen villages.

The other group visited and played with children living in one of VBB’s Children’s Homes. Along with good times, the team brought practical supplies like new blankets, toiletries, and some toys. In the evening, the group traveled to a jungle village with the kids and sang Christmas carols. 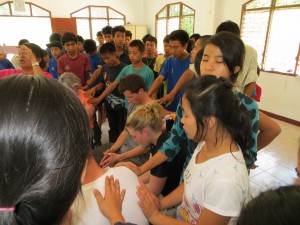 Before the team left, they sat down in two rows and the children gathered all around them.

“They all started murmuring prayers for our safety and that we would touch a lot of people,” shares one of the team members in a recent VBB update. “They blessed us more than we did them.”

The final opportunity to be God’s hands and feet involved smuggling His Word to believers in two closed nations. While it may seem like a dangerous task, Romeijn says the risk is pretty low for team members. 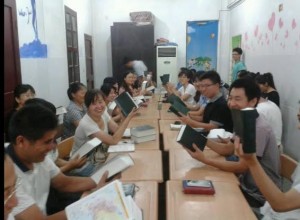 “As an American, if we’re caught in Customs with Bibles, the worst thing that’s [likely] going to happen to us is we can be yelled at, or detained for a few hours,” she says.

A bigger threat is posed to VBB ministry partners. Since they’re citizens, their punishments would be more severe.

In the end, VBB’s team managed to smuggle several back packs filled with study Bibles into the two closed countries. Each Bible holds a concordance and other study resources, and will be a great asset to the pastors and house church leaders who received them. 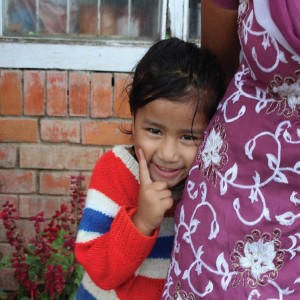 The focus of this December short-term missions trip was primarily medical. However, in each opportunity the Lord presented, the VBB team was faithful to encourage other believers and share God’s Word with any who didn’t know Him.

“It’s amazing to see the difference that it makes to these people,” Romeijn says, referring to the impact VBB trips make.

“A lot of times, it isn’t necessarily what we bring or what we do. It’s just knowing that somebody cares and that somebody would come from half-a-world away to bring them something, to know that they’re thought of.”