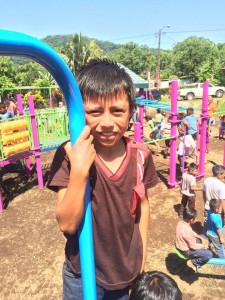 “Service team is a group sent out by a church or an organization that goes around the world on a mission trip, and they get to experience international missions and be a part of what God is doing around the world,” explains Brian Veen of Kids Alive.

Service teams tend to go for short-term missions of about one or two weeks. But their influence makes a long-term impact in the lives of kids. They help to build buildings, playgrounds, and relationships, and they run programs that share the Gospel.

One recent team headed down to Guatemala where they built playgrounds, giving kids the chance to play and enjoy being together. Veen says this and other projects opens doors and helps Kids Alive to connect with people.

“We’ve seen God work in a number of ways. Most often it’s just through the relationships that get built on teams. It’s kids that weren’t opening up before that just by being able to play and by playing soccer are now willing to engage with staff and share their story and open up about their past.”

Another example has included kids not wanting to go to school. But because of Kids Alive, they were able to feel like they belonged and were valued by teachers.

These results last even after service team members head back home because Kids Alive is working with hundreds of national staff members.

“Long after a team leaves, the work is still going on, the ministry is still changing lives. Kids are still learning about Christ and enrolled in schools. Teams are one part of that.”

Sponsorships for individual children are helping to make that effect long lasting, as well as internships, which team members tend to get involved in.

“Service team members become interns, and they want a longer experience: maybe three weeks up to six months. A lot of them go back for the summer and get a chance to continue impacting lives,” Veen says.

“One particular example is just a man on that team who went down and now wants to get his church involved because of what he saw God doing on that trip.”

Veen had a similar experience. He shares that he went on several service team trips, became a missionary, and went to help out in the Dominican Republic for five years.

There are trips every year to Kenya, Peru, Haiti, and several other countries that are promoting and taking part in showing kids the Love of Jesus. Want to start making long-term impacts in a short amount of time? Help out here!