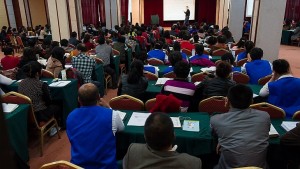 USA (IMB/MNN) — Training believers how to effectively disciple new Christians is the heartbeat of Jeremiah and Joy Farmer’s* ministry. The International Mission Board (IMB) couple champion intentional discipleship and provide the training and resources for U.S. and East Asian church networks to ensure their churches are healthy and growing deeper in Christ.

“In five years time, [in East Asia] we’ve had 500 new churches with 1.5 million who heard the gospel and 30,000 believed. The statistics are overwhelming and incomprehensible,” Jeremiah says.

One reason they’ve seen these numbers is “because every single person virtually in all of these groups are all involved” in church affairs, ministry, and in outreach.

“How do you share the gospel with 700,000 people in a year in a closed country?” Jeremiah asks. “We’re not doing stadium stuff. It’s because everyone’s doing it. How do you get everyone doing it? It’s this process of reproducibility that’s beat into the whole system and idea.”

Jeremiah explains that the situation in East Asia isn’t entirely different from the U.S.

“They’re not growing primarily because we’re not intentionally equipping the congregation…to be involved in significant ministry…. There’s no intentional process or plan to develop disciples.”

Jeremiah says that in many American churches, “There are programs, not plans; there’s a difference.”

In conversations with pastors in Asia as well as in the U.S., Jeremiah has asked what happens when someone walks down the aisle and commits their life to Christ. Pastors respond that the believers are baptized. Some churches have a new believers’ class, and other churches incorporate new believers into existing Sunday School classes.

“With this model, disciples are grown by accident. They are not grown with purpose at all,” Jeremiah explains.

“Disciples are not grown by accident…. We don’t want it by accident. It must be done with intentionality. In fact, we aim for healthy, sustainable, reproducibility that is all directed by God-driven intentionality.”

The free training materials and curriculum that Jeremiah wrote and assembled meets the above criterion. It’s available in both English and the local language.

Jeremiah emphasizes that “it’s really following God’s model, honestly, of equipping the saints to do the ministry to build the body of Christ,” he says.

Many pastors and churches take the concepts and philosophies and translate it back to their churches in the U.S.

A Baptist church in North Augusta, South Carolina, embraced a tight-knit model of house groups where leadership is shared. The pastor isn’t the only one doing ministry. The pastor came to East Asia in 2015 to teach seminary classes in house church networks.

The Farmers visited the church during their last visit to the U.S. When the pastor heard the Farmers’ strategy, he was on board. As well, a deacon and small group leader from the church was once a back-row Baptist. Now, he’s a deacon who is teaching seminary classes.

The North Augusta church isn’t the only church that employs the Farmer’s discipleship model. Some churches in the Mississippi Baptist Convention and churches in Indiana, Texas, and Georgia are using it as well.

Here’s what to expect at the training Farmer is hosting this October:

Training modules that are used in East Asia to effectively partner with churches and strategically plan for growing God’s Kingdom in a healthy, sustainable manner according to His leading, ways, and purposes.

October 1-3, the Farmers are coming to Orlando, Florida, to train U.S. churches. They are inviting Southern Baptist churches to attend and learn how their church can employ wildly successful tools for church health and growth.

Register for the training and discover how you can get involved here!