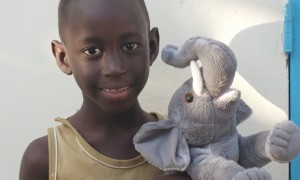 Jordan (ASM/MNN) — As thousands fled to Jordan from Sudan’s Darfur region last fall, they arrived, grateful to be alive.

The United Nations High Commissioner for Refugees notes Jordan reported a 140% increase in non-Syrian and non-Iraqi refugees in 2013 over the previous year, mainly made up of non-Arab Sudanese fleeing Darfur.

Almost a year later, with global attention fixed on the flood Syrians and Iraqis, many of Sudan’s war survivors feel invisible and forgotten. Among that population are the most vulnerable: the children. Their education has been disrupted, and they bear the scars of war and the loss of their childhood.

Many of these children experience symptom of severe stress: separation fears; nervousness or aggression; strong reactions to noise; excessive crying; or nightmares and trouble sleeping. Research shows that a stuffed animal can become an emotional anchor to keep the child from being swept away by despair. It can bring physical and emotional comfort to children and adults who have experienced trauma and pain. 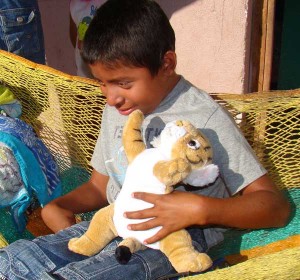 Resulting from a partnership between MegaVoice, the JESUS Film™, Global Recordings Network,
and Simply the Story, each Wildlife STORYTELLER consists of a stuffed animal with a pocket holding a MegaVoice audio player.

The MegaVoice usually contains the audio adaptation of the JESUS film or The Story of Jesus for Children and other audio Bible stories in the recipient’s heart language.

This month, Audio Scripture Ministries plans to distribute over 600 Wildlife STORYTELLERS to Sudanese refugee children in Jordan through their partnership with MegaVoice. Why?

The Wildlife STORYTELLERS will help children of poverty, disease, and disaster literally feel God’s love, even as they hear about the hope He gives. And they can give any child the foundation of faith they need to grow into followers of Christ.

Pray that the Stories of Jesus will bring comfort to these precious ones.