Lebanon (MNN) — Concerned about a side effect of the Syrian civil war, International Labor Organization, UNICEF. and Save the Children commissioned a report detailing the struggles faced by the youngest of the survivors to flee to Lebanon.

The report raises the question of whether or not these children will survive their refuge. They represent an entire generation displaced by war and devastated by hardship. What’s more, the study reveals that if nothing changes, the effects will create another lost generation.

Executive Vice President of Kids Alive International Matt Parker explains, “This survey has discovered that more than 1500 children are living and working on Lebanon’s streets. Three quarters of those kids are Syrian.”

The refugee problem reveals another layer of trouble, explains Parker. “It’s put huge pressure on the infrastructure there. A lot of these refugees don’t have anywhere stable to live, don’t have stable employment. And so it’s causing kids, in many cases, to end up in the streets, begging, or trying to earn some money there.”

Lebanon is hosting roughly a million and a half refugees from Syria. The vast majority of these are women and children, many of whom take to the streets to eke out a living. “For kids on the streets, it’s very easy for them to get involved in gangs; there is the risk of trafficking. There’s the risk of alcohol abuse, or substance abuse, and then, just violence,” says Parker. The survey also revealed that these refugees are young. “A quarter of these kids discovered during the survey in Lebanon are under the age of nine. A majority are between the ages of 10 and 14, so it’s a very serious situation.” 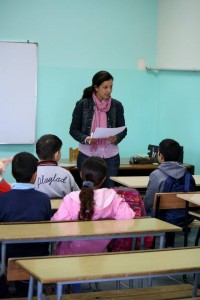 Kids Alive International has several ministries in Lebanon. The team is working with almost 100 Syrian refugee children, some of whom are in the school program. The majority are receiving an education, meals, counseling, and care in the new program called the “Oasis.” Parker says their intervention is essential. No Oasis: no school, no future. “For the kids that we are working with, this is a critical service that we are providing. What we really want to do is increase the number of children that we are caring for over the next year.”

In the past three months, Kids Alive has seen some significant improvements in the children they are working with: they are gaining in confidence and making some excellent academic progress. Encouraged, Parker says, “We’ve got plans to add another program or certainly add between 60 and 100 new children to the program, so we want to continue to grow. We have a long waiting list.”

A new counseling arm of the Kids Alive Lebanon program starts this week, too. (Stay tuned for that part of the story tomorrow.) It’s not just for the children, but also their families. Here’s why it works: “The Gospel is central to this program. One of the exciting aspects, over the past few months, is that many of the kids that are coming to us are hearing about the Good News of Jesus Christ for the first time.”

Frankly, growth takes both vision and money. Kids Alive needs help so they can do more to be part of the solution to the street children problems in Lebanon. They also need prayer. Specifically, pray for children that are currently working on the streets. Ask God to protect them and help them find their way to a place like the Oasis that will provide an education. Pray that the children in their programs would continue to thrive and reach their full potential and come to know Christ.