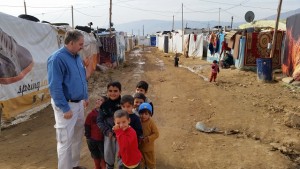 Lebanon (GAiN) — President and CEO of Global Aid Network (GAiN) International, Al Goff, just returned from Lebanon after assessing the refugee problem and observing the activities of GAiN USA’s partners at Life Agape. This is his report from the Beqaa Valley in Lebanon.

The Roman Empire prized this fertile farmland between Syria and the mountains of Lebanon for its production of grain, and today, much of Lebanon’s food is grown here. Unfortunately, the Beqaa Valley also feeds the worlds craving for hashish and opium, and is a notorious stronghold for Hezbollah.

The locals have found a way to capitalize on the large influx of refugees, who are Shi’ite, Sunni, and Druze from Iraq and Syria. Farmers typically lease 25 square meters of land with a small concrete slab for about $500 per year. You can build your own wooden frame or pay him construction costs to have one put up for you. To keep the weather out, the refugees raid billboards for canvas or any other materials they can find. The United Nations continues to provide water and latrines, but food subsidies have stopped.

Each of these scrap-material shanties becomes home to families of 7-20 people–mostly women, children, and older men. Most of their young men are fighting in militias or for the government. Even so, lots of babies live in these camps. Most women older than 15 have at least one child; on average, there are 7 children for every woman of child-bearing age. We can’t avoid the obvious conclusions: the women are used by their male family members or forced into prostitution.

These camps have no laws because neither government nor law enforcement exists to maintain order and protect the helpless. It’s as though the normal rules and rhythms of life don’t exist in these camps; it’s like living in perpetual limbo.

Life Agape helps bring light into these dark corners, often in cooperation with medical teams and development groups (Community Health Education is a good example). Because more than 90% of the populatioDiscovery Bible studies for evangelism and discipleship. These work quite well because the residents have nothing else to do.

They conduct literacy programs, offer health and hygiene training, and read Bible stories. While I attended, we told the story of Christ’s birth. These Sunni Muslim women were so excited when we explained the very humble circumstances of Jesus birth. Most of the women come from a Bedouin background and have husbands who tend sheep. They could identify personally with Mary and every detail of her hardship.

I helped teach a class of 50 children. For one activity, the team distributed to each child a pad of paper, crayons, and colored pencils. I then asked the kids to draw a picture, promising that the best artist would win extra drawing supplies. The assignment: draw what you think about most. Most of the pictures showed bombs dropping on their homes, or the kinds of homes they hoped to have in the future.

Horrors of the past or dreams of the future.

Nothing about their lives in limbo, almost like the present doesn’t really exist.

Thanks to help from active Christians in support of GAiN International, and expert partners working in tough places, refugees receive help in the form of food, clothes, education, and more; and they receive hope of a better future when they hear the good news of Jesus Christ.

To help build a better future by donating to GAiN USA, click here.