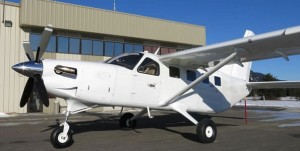 And now, just four months later: Kodiak #2 for Papua New Guinea! It comes with the purchase price paid and many extras included. By the end of September, Kodiak #2 could be at New Tribes Mission Aviation headquarters in McNeal, AZ, and Kodiak #1 could be on its way to Papua New Guinea.

God has provided once again through His people to furnish this new Kodiak. What a tool it will be to sustain missionary teams in harsh regions as they bring Christ to tribal villages!

You can almost hear the sigh of relief coming from tribal teams who only get supplies every three months. Right now, “with limited pilots and aircraft, it’s hard to reach everyone,” says Adie Leedahl. Her husband, NTMA pilot Jon Leedahl, recently flew his first round of supply routes on West New Britain island as part of his Kodiak training on location in Papua New Guinea.

With Jon ready to fly when the first Kodiak arrives, the supply situation should ease up. “Every translator or church planter who Jon has flown has said that they are so thankful for [his] coming!” says Adie.

It’s not a surprise that missionaries are glad the Kodiak fleet of three is 2/3 reality! Besides carrying supplies, the Kodiak can also do medevacs, bringing great peace of mind to missionary families living in remote areas. To the most outlying locations where NTM serves, the Kodiak could make an emergency round-trip flight without refueling. For critical medical cases, it can make the over-water flight to Australia.

Don’t stop praying for the Kodiaks to be positioned as lifelines to bring the gospel to remote tribes. Kodiak #1 is nearing its final stages of preparation. Kodiak #2 will need all the same outfitting–the HF radio, satellite tracking system, other equipment and tools, ferry flight, and paperwork, along with finances to cover all those items.

Just as God is providing for the final costs of Kodiak #1, we are confident that He will do the same for Kodiak #2. It is clear that He wants isolated people to meet Him, and He is providing the transportation for it to happen!

Impact remote people groups by giving to the outfitting of Kodiak #2.