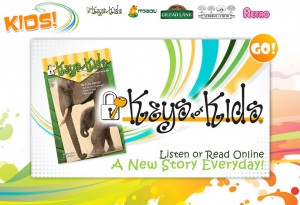 Photo courtesy of Keys for Kids

USA (MNN) — 25 years ago in a small closet studio in the back of Cornerstone University’s radio station, His Kids Radio (then known as the Children’s Sonshine Network) went on the air on October 23, 1989.

It was a momentous day and just the beginning of many years of 24-hour broadcast ministry to kids and families. The kids’ network aired classic programs like Children’s Bible Hour and Ranger Bill, and played songs from the Music Machine and Psalty the Singing Songbook.

Through the years, His Kids Radio has grown with the latest technology, shifting from SCA broadcast and satellite delivery nationwide to digital and internet-based listening.

What better way, then, to celebrate 25 years than to mark a new beginning with a new name? His Kids Radio is now Keys for Kids Radio.

Though the name is changing, the mission stays the same: to point children to Jesus through songs and radio drama. Many favorite programs will still be heard on Keys for Kids Radio, including Paws and Tails, Wee Kids, Karen and Kids, and Kid’s Corner.

Kids for Keys Executive Director Terre Ritchie says, “They [Cornerstone Radio] have offered us the opportunity to take it over, and as a focused children’s ministry, we are more than excited.”

Keys for Kids Ministries is an international Christian ministry based on the Gospel of Jesus Christ, producing and distributing excellent media resources to evangelize and disciple kids and their families.

Ritchie asks for prayer as there will be a lot of work shared among only a few people. Also pray that Keys for Kids will help more children and families grow in Christ.