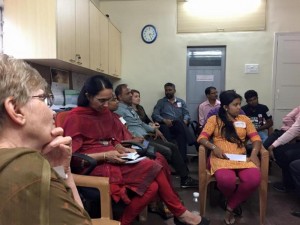 India (MNN) — Think your job is hard? How much harder would it be without any training?

“A lot of times, people get put into positions of authority and leadership without any training at all,” notes Kaytie Fieldler with India Partners, while speaking to MNN from India via Skype.

Fiedler and a small team are currently sharing job training with several ministry cohorts. After meeting with leaders in two different cities, the team is on their way to a third location on the east side of India.

Please pray for protection and safety as the team travels. Pray their upcoming job training sessions will be fruitful.

For the last few days, Fiedler and her teammates have been job training with leaders who minister in the red-light district and prison system of a major city.

“Their jobs are to go in and form relationships with people that are in really unspeakable conditions,” Fiedler shares. “It’s highly oppressive; the work is really difficult and slow.”

India Partners’ cohorts work all hours of the day in the city’s underbelly, witnessing the horrors of human trafficking, as they bring Jesus to the “least of these.” Fiedler says their “work culture” is similar to that of the U.S.

“If you’re not working yourself to death, then you’re not really working hard enough for the Lord,” she summarizes. 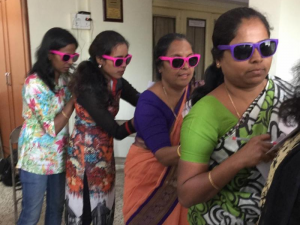 Sunglasses and teamwork teach leaders about compassion in this exercise.
(Photo courtesy of India Partners)

The team’s job training sessions ranged from broad topics such as servant leadership and motivation, to subjects that hit a more personal note. As these workers reach out to suffering prisoners and trafficked women, it’s easy for them to harbor bitterness toward evil people and situations.

Fiedler and her team spoke about forgiveness and releasing bitterness, as well as seeing others with eyes of compassion. After two “solid” days of job training, the team visited their partners’ ministry field.

“That was probably the most impactful part of our time there,” shares Fiedler.

According to Legal Service India, four women/girls enter the sex trade every hour; three do so against their will. Approximately 80%of human trafficking victims in India are women and children. Over 35% of India’s sex slaves are under the age of 18.

For Fiedler and her team, these statistics came to life when they visited the red-light district their partners work in.

“It’s really troubling to see; it’s very oppressive,” Fiedler recounts. “[We went] past room after room after room of these ladies…sitting outside, vacant eyes, heavily made-up, and just waiting [for a customer].” 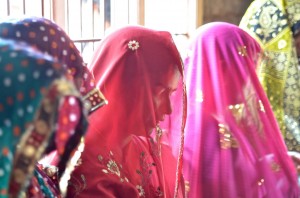 And yet: God. India Partners’ cohorts recently began renting one of the rooms in this brothel and have transformed it into a “drop-in” center.

“We were able to meet with about 20 women that come there once a week for a Bible study,” shares Fiedler.

“It is one of the most spectacular experiences. We were able to do crafts with them, we brought a message of hope…to bring Jesus, bring love, bring genuine hugs, was really impactful.”

By supporting one of India Partners’ cohorts, you can help women and children trapped in the sex trade realize their Savior’s love. Click here to multiply “silver lining stories” like this.