The JESUS film has been reaching people
with the Gospel for 35 years.
(Photo by The JESUS Film Project).

International (MNN) — Film translation has just achieved another milestone. This time, it’s in the realm of audio-visual Scripture; specifically, the JESUS film.

Kary Hagen with The JESUS Film Project (JFP) says they just finished dubbing the film into the 1,300th language. Of those, 1,261 are available on the JESUS Film Media Web site and app.

“It’s exciting to be giving more people access that they never had to God’s Word.”

There’s more to creating the JESUS film in another language than meets the eye.

“If you’re making a movie, that’s one thing; but if you want to make it available in heart languages, [that’s another],” says Hagen.

He describes seven common (sometimes eight) steps in the process:

“It’s quite a production. [It] requires a lot of different skill-sets and experts to help us get to the finish line,” Hagen adds. “It’s not one organization or one person that does this; it’s us working together as a body.” 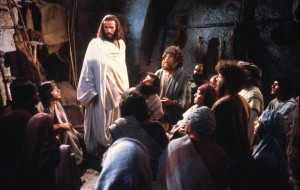 “They actually believe that life originated from water,” notes Hagen.

“With the JESUS film [bringing] the person of Christ to them, and if they can choose to follow Christ, they’ll have access to Living Water through the Holy Spirit.”

The Koya JESUS film was produced entirely by a JFP partner in the region.

“We’re very dependent on our partners–from donors to Bible translators, to people on the ground that show the film,” says Hagen.

“In 2014, we’ve seen 100 new JESUS films produced–40 of those through partners, 60 that we’ve done ourselves. I think that is a testimony of the ‘Body of Christ effort’ that it takes.”

There’s a place for you on this team.

“You can give, you can go, you can pray; we need all the help we can get,” says Hagen.

Pray
“Anyone can pray, and we need a lot of prayer support. There are places and there are people groups that we don’t have access to,” he adds.

“Prayer will remove some of those mountains and those barriers.” 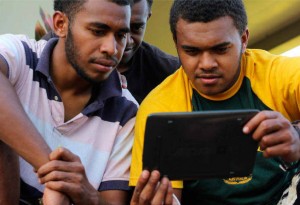 (Photo courtesy of The JESUS Film Project via Facebook)

“We require a lot of funding to accomplish all the tasks that we have: travel, and things that it takes to produce a JESUS film,” says Hagen.

Get the JESUS film translated into more languages here.

Go
“There’s a lot of people that haven’t heard yet,” Hagen reports.

“Maybe some of your listeners want to join with us and leverage their skill and expertise in getting the Gospel out there.”