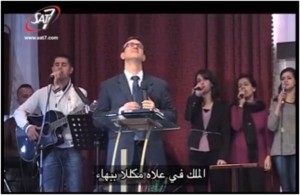 Algeria (SAT-7/MNN) — For many Christians in the U.S., going to church means a 10-minute drive down the road. But for believers in North Africa, It’s not nearly that simple.

At a rural Protestant church in Algeria, believers walk for miles through the rugged Atlas Mountains to make it to Sunday worship. They get up as early as 5:00 a.m. to make it to the 9:30 a.m. service, which is usually packed by 8:00 a.m.

For many other believers in North Africa, public worship isn’t even an option. Thousands of rural villages have no church building or Christian gatherings.

The program is aired in the Kabyle language, a sub-dialect of the Amazigh language, along with Arabic subtitles. SAT-7 chose Kabyle because in countries such as Morocco, Tunisia, Libya, and Somalia, it is often better understood than Arabic.

“Before we start our cell group church in my house on Sundays, we watch My Church in Algeria because it is in Kabyle,” one viewer from Morocco says, according to an article by SAT-7.

In a country where Christianity was nearly wiped out by Arab invasions in the 7th century, Christianity is growing. Out of more than 39 million people in Algeria, an estimated 75,000 are Christians, with a lot of the growth coming in the last 20 years.

Can you help SAT-7 continue reaching Muslims for Christ through satellite television? For $1, you can support one SAT-7 viewer for a year.

Remember also to keep Algeria, as well as the rest of North Africa, in your prayers. Pray that SAT-7 programs would continue touching hearts and that Muslims would come to Christ.