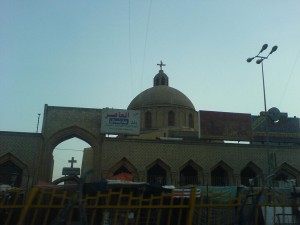 Picture taken in 2006 of a church in Baghdad.

Iraq (MNN) — Islamic State (IS) terrorists have set their sights on Baghdad as they prepare to take Qara Tappa, a town just north of the capital. It’s reportedly a move to fend off Kurdish fighters, but it could also be a step closer toward the militants’ stated goal of seizing Iraq’s capital city.

“Seizing Baghdad would be difficult…but a foothold just near the capital could make it easier for the Islamic State to carry out suicide bombings, deepen sectarian tensions, and [destabilize] Iraq,” writes Reuters’ Raheem Salman in a recent report.

According to the UN, around 1.2 million people have been driven from their homes by the recent crisis. In July, over 5,500 civilians had been killed during the first half of 2014 as a result of insurgent violence. Iraq has been given the UN’s highest emergency status, “Level 3 Emergency,” along with Syria, South Sudan, and the Central African Republic. 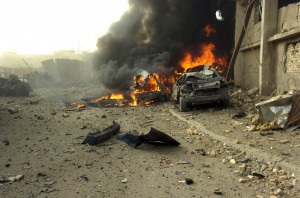 GAIN USA’s Mark Gaither says they’re upping a commitment to help ministry partners and refugees, both in refugee camps and a few cities where people are taking shelter form the Islamic State.

“We are in the process of mobilizing to dig deep wells…at least five wells in each of these cities,” Gaither reports. “The most critical need right now is water, because of the long-term nature of what we’re likely to see.”

GAIN USA is also sending help in the form of food and medical supplies. Help their efforts go farther here.

Crisis leads to opportunity
As ministry partners distribute supplies, they become friends with refugees. This often leads to a chance to tell them about Jesus.

“We have these opportunities one-on-one, and that’s one of the reasons we shy away from doing mass distributions, because it’s very difficult to follow-up and build relationships,” Gaither explains. 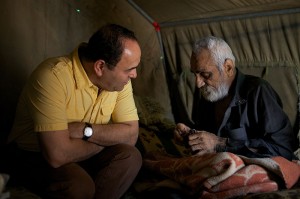 However, when desperate situations call for a mass distribution of supplies, GAIN USA has a strategy for evangelism. They partner with their sister ministry, The JESUS Film Project, to show the film, JESUS.

“They see the Gospel of Luke played out for them, and they hear, in their own language, Jesus talking to them and asking them to follow Him,” says Gaither.

This gives team members a starting point to share their own personal testimonies of salvation and engage in group discussion.

“We have people whose hearts are darkened, who are not filled with the light of the Gospel, and that’s why when we engage in humanitarian aid. It’s not just about meeting the physical needs,” Gaither states.

“We’re dealing with the hearts of people who need to be submitted to Jesus Christ, and that’s really the only long-term solution.”

Please continue to surround this crisis in prayer. Gaither shares specific requests here, or you can find them listed on the upper-right side of this page.

Pray for the plans of the Islamic State to be thwarted.