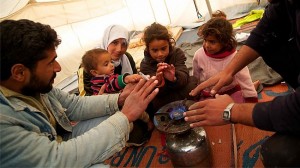 Airstrikes against ISIS targets
in northern Syria are bound to increase the flood
of refugees at a time when nighttime
temperatures are dropping quickly.
(BGR photo)

Syria (MNN/BP) — It’s something that has been feared for weeks. But, it looks as though Islamic State (IS) jihadists are taking even more ground. The Islamic State flag was hoisted over a building in Kobani, a Syrian town along the Turkey border. IS and Kurdish forces have been fighting over the city in recent days.

According to reports, President Erdogan of Turkey believes the border town doesn’t stand a chance, despite United States-led airstrikes against the fighters. Many experts say Turkey won’t be getting involved because Turkey views Kurdish fighters as more of a threat to Turkey than IS jihadists.

According to Baptist Press, over just three days last week, at least 130,000 new Syrian refugees flooded across the border into Turkey because of an ISIS offensive in their hometowns. More than 3 million officially-registered refugees have been driven out of the country over the four years of crisis in Syria.

“The current strikes inside Syria are bound to increase the already overwhelming flood of displaced people fleeing to find safety,” said a man we’ll call Don Alan. “Families desiring safety for their children will look for places that are safe and quiet.”

“Perhaps you know, or maybe you don’t, but currently in Iraq and Syria we are witnessing a once-in-a-thousand-year destruction of the Christian church. A modern book of martyrs is being written,” Floyd said. “We need to elevate before our churches the international crisis in Iraq and Syria.

“Pastors and Christian leaders, educate yourself and speak up on behalf of these brothers and sisters in your churches and on social media. Don’t let the world ignore this,” Floyd said. “I call upon each of us tonight as Southern Baptists to be a voice that resounds loudly and clearly about this issue.”

Alan echoed Floyd’s call to prayer for suffering refugees–among whom Christians are a minority–and the workers risking their lives to help them.

“We should be challenged not only to increase our prayers, but also to be broken for the continued challenges faced by those being impacted by the fighting and bombings going in their country,” Alan said.

“Pray for courage as we continue to minister and share the love of Christ in the midst of such turmoil,” Alan added. “We know that the Lord’s desire is that not one should perish without having a chance to hear the Good News, that there can be peace on earth in the midst of such traumatic events. May we not grow weary.”