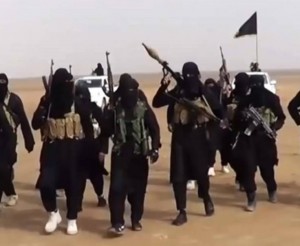 Syria (MNN) — Open Doors USA confirms reports that members of the Islamic State terror group have abducted 90 Assyrian Christians from villages in northeast Syria. Thousands of Assyrian Christians live in a string of villages on both sides of the Khabur River North of the city of Hassaka.

Open Doors USA CEO and president David Curry explains, “What you have is ISIS–which controls a large part of Syria and Iraq–taking back some territory near the Turkey border where they have kidnapped 90-100 Christians within that community.”

The early morning raids followed an assault that re-took two villages from the Kurds on Monday. The question is: why take captives now? Curry says, “I think that these folks are going to be used as an example or certainly held perhaps for ransom, but I’m guessing that it’s going to be a very difficult situation.” According to A Demand For Action (ADFA), an awareness group, ISIS wants to exchange the captives for ISIS prisoners.

Open Doors shared the following from an Assyrian Christian woman from Tal Shamiram who now lives in Beirut. She has been desperately trying to find out what has become of her parents, as well as her brother and his wife and children.

“Land lines have been cut, and their mobiles are closed,” she told Associated Press. “Have they been slaughtered? Are they still alive? We’re searching for any news.” She spoke on condition of anonymity for fear of endangering relatives believed to be held by the militants.

“My family visited me last month and returned to Syria. There were clashes, but it was normal, nothing exceptional. I feel so helpless. I cannot do anything for them but pray,” she said by telephone, her voice breaking. 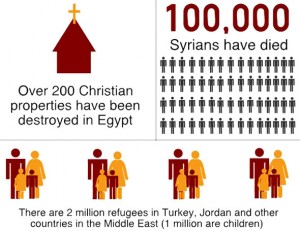 Will ISIS give the remaining Christians in Tal Shamiram the same options they gave those in Mosul, Iraq? When ISIS began its advance, it gave Christians three options in territories it occupied: leave, pay a tax to stay, or die. Curry doesn’t think those options will be available this time around. Besides, “People have found that ISIS will not keep their word. There were a handful of people who paid a tax in order to stay and then were executed anyway. So, I don’t think the Christians in Tal Shamiram or this area here, where the Christians were abducted, are going to trust them and try to pay a tax.”

Just weeks ago, ISIS beheaded 21 Egyptian Christians in Libya, setting off international condemnation and strengthening the union among the 60 groups working to destroy ISIS. It was essentially a declaration of war. “It’s genocide of Christians within Iraq and Syria in that they’re targeting the elimination of this part of their culture.”

Because of the advance of IS, thousands of inhabitants from the villages fled to the bigger cities. Open Doors sources say that IS has reported today on their radio station that they detained tens of crusaders and seized 10 villages around Tal Tamr after clashes with Kurdish militiamen. IS frequently refers to Christians as “crusaders.”

Are they followers of Christ, or people who are not Muslim? Curry wonders if that matters. To the terror group, there is no distinction. “Whether they come from Orthodox faith or evangelical movements, these are people who have, for centuries, stood for Jesus in this region.” While every Christian may not have a personal faith in Christ, he adds, “If it was a casual thing, I don’t think people would be willing to die for it. They’re standing by their faith. I take them, not just by their word, but by what they’re doing.” 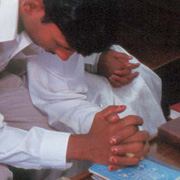 That’s also another way to pray: Ask God to make Himself real to those who don’t have a personal faith in Him. Pray that God will change the hearts of the extremists. Why? “There are people, even in the midst of this difficulty, who are coming to a personal faith in Jesus there. They’re really coming to peace in the midst of a very chaotic and difficult environment.”

Please give to help our brothers and sisters in Christ who live in areas like Syria and the critical parts of the Middle East, where extremists are targeting Christians. Your help will save lives, providing not only needed supplies such as food and water, but also counseling, Biblical training, and Scriptures to Christians in the Middle East who face violent persecution for being followers of Jesus.