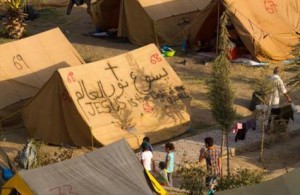 Iraq (MNN) — What used to be houses of worship, converted by the Islamic State terror group into detention centers, are now houses of misery, if recent media reports are to be believed.

In the press to expand the borders of the ISIS caliphate, fighters issue the following ultimatum: convert to Islam, pay a tax to remain in the area, abandon your home permanently, or be killed.

More than 250,000 Christians have fled Northern Iraq amid ISIS persecution. These were the last Christians residing in the region. Greg Musselman, a spokesman for the Voice of the Martyrs Canada, describes what’s happening this way: “It looks like Christianity is going to be extinct. You’ve heard it in Syria, we heard the stories from Israel [and] Egypt. All through that region, Christianity is just under such vicious attack.” He goes on to say, “People had homes, lives, and good jobs in some of these communities where ISIS came in. And yet, there still is joy. ‘At least we have our family. Yes, we’ve lost all our possessions, but they can’t take Jesus from us.'”

Musselman shares the story of a church in Mosul. 70 people gathered in the church to pray, knowing that ISIS would arrive soon and issue their demands. Not long afterward, the inevitable happened. ISIS fighters showed up, made their demands, and God answered in a big way, says Musselman. “They were able to get away. None of them died. 15 of the 18 families are now at an Alliance (Christian and Missionary Alliance) church in Erbil, two in a place called Dahuk, and one in Jordan.” In fact, “the head guy of ISIS in Baghdad said he didn’t know why he did that [allowed them to leave].” 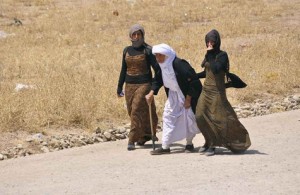 The vast majority of these Christ-followers sought refuge in Kurdish-controlled areas, but even there, they are far from safe due to the overcrowded living conditions, lack of adequate resources, and risk of life-threatening illness. Through VOMC partners, “We were working with the Bible societies over there to get Bibles to Christians and non-Christians. Many Muslims are very open to the Gospel, right now. Then also, [we’re getting them] food supplies and getting their stories, and then, just finding ways in which Voice of the Martyrs can partner with our brothers and sisters there, especially those that are doing evangelistic work in both Iraq and Syria.”

ISIS is ransacking the Christian culture–a predictor of what is expected to follow other minority groups in the region. Disillusionment among Muslims started with a whisper, but now, says Musselman, “Their Muslim neighbors want to know more about the ‘Jesus of the Bible’ and the way that Christians live differently, even in the midst of desperate times.” Why? “Because they’re looking at ISIS [and saying], ‘If that’s Islam, we don’t want that.'” 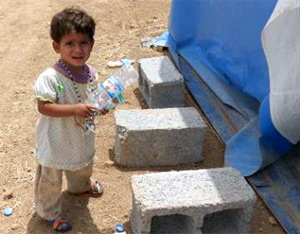 Why should you care? Musselman answers, “‘When one part of the body suffers, we all suffer.’ I think that when we pray that, there’s something that happens in our spirits. If we say we love Jesus, we should love His entire Church.” Plus, God changes hearts. Musselman urges you to pray for that change in the hearts of ISIS fighters. That’s already happening among the Boko Haram in Nigeria. Musselman shares the transformation of one of the militants: “As he was killing this last Christian, he said, ‘The way this guy died opened up my mind to Jesus.’ He has since come to know the Lord, so we’ll believe that’s going to happen in ISIS.”

Ask that the Holy Spirit will move throughout this crisis, impacting the region, country and the entire Middle East to achieve God’s greater purposes.

Lift up in prayer the militants perpetrating these horrific crimes, asking that there be confusion and disagreement within their ranks so that all plans of evil and violence may cease.

Pray also that the militant group’s financial resources will be effectively cut off.