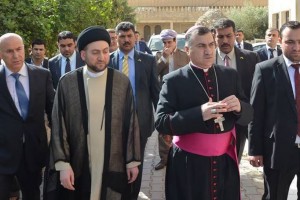 An assistant to Gen. Sirwan Barzani, commander of the sector, spoke of a “big attack” near the towns of Gwer and Makhmour. The towns are some 28 miles from Irbil, the Kurdish capital.

The report bodes ill for tens of thousands of Christians and other religious minorities taking refuge in Irbil. The internally displaced persons (IDPs) already fled the Islamic group this summer when the Islamist militants overran their ancestral homelands in the Nineveh Plains of northern Iraq.

While IDPs hear reports of the fighting, Irbil is calm for now, an aid worker told Aleteia by phone Wednesday. She said that there is an atmosphere of unease because last summer, many residents of towns on the Nineveh Plain were assured they were safe, only to find later that ISIS was attacking their villages. Many who are now taking refuge in Irbil had to leave their homes with little more than the clothes they were wearing.

The aid worker, who wished to remain anonymous, added that many IDPs are still living in caravans and unfinished buildings in the Kurdish capital, leading to feelings of desperation.

ISIS launched its offensive on Kurdish positions from several directions, one Kurdish official said. Coalition aircraft were in the area, according to the officials, but they had so far been unable to fire on ISIS units because of the close proximity of the two sides on the ground.

A CNN team was in the area 10 days ago and was told by fighters at the front that ISIS was making almost daily attempts to infiltrate through Kurdish lines, which are strung out along a stretch of the River Zab.

Fortifications are few and far between. Volunteer fighters have very little in the way of weaponry.

In January, nearly 30 Peshmerga fighters were killed in the area by a surprise ISIS attack across the river.

CNN quoted Kurdish officials as saying they were concerned ISIS fighters would break through their lines. If that happens, it would spell disaster for Christian refugees, who have already weathered a cold winter in the Kurdish capital.

CNN speculated, though, that the aim of Tuesday’s attacks are not so much to take Irbil but to draw an already stretched Kurdish army  in many different directions, in order to relieve the pressure on Mosul, which ISIS seized in June. “Kurdish forces recently have been trying to surround Mosul to cut off ISIS’ lines of supply from Syria, setting up what could be an eventual assault to try to expel the terror group from the city,” CNN said.

The new development comes just a week after the Chaldean archbishop of Irbil, Bashar Warda, visited Great Britain to seek support in the fight against the Islamic State. He pleaded with Parliamentarians to do all in their power to persuade the British government to authorize the deployment of troops to help to drive out ISIS fighters from the Nineveh Plain.

“It is hard for a Catholic bishop to say that we have to advocate a military action but we have to go for that,” the archbishop told a meeting in the House of Lords where he was a guest of Lord Alton of Liverpool. “There is no other option.”

Archbishop Warda’s diocese covers the Kurdish-controlled territory which since last summer has become the home to more than 120,000 Iraqi Christian refugees who fled ISIS. He said that U.S.-led airstrikes have made some impact on the activities of ISIS but that they were “not enough” to liberate the Christian settlements on the Nineveh Plain.

“Military action is needed, a powerful one where they could really get those people out of these villages so that our people and others can return,” Archbishop Warda said. In response to a question from a member of Parliament, the archbishop confirmed that he was suggesting that Britain sends in troops. The Iraqi army and the Kurdish Peshmerga are insufficiently well-trained or equipped to defeat ISIS, he said, adding, “Someone has to do the fighting.”