Russia (MNN) — While most of the world celebrated Christmas last week, the Orthodox church celebrates it on January 7. That means churches in Russia and some countries in the former Soviet Union are just getting ready to start their outreach events. Slavic Gospel Association is just one organization that’s getting ready, despite a troubled Russian economy.

President of SGA Bob Provost says the fall of the ruble is having an effect on churches. “Prices have doubled. So, it’s kind of like hurting the people both ways. The money is worth less, and the prices are going up.” 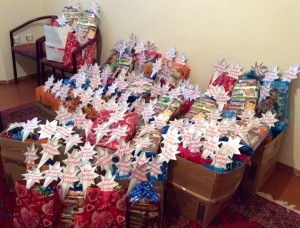 In addition, each child gets a Christmas gift which includes toys, clothing, treats, and Scripture.

“For most of the children, they come home saying it was the best thing they’ve ever experienced,” says Provost.

More importantly, Provost says, “Through this process, many children receive Christ as their Savior. Many start coming to Sunday school. Many of their family [members also] start coming to church as a result. The single greatest outreach in the former Soviet Union is the outreach at Christmas time.”

SGA is hoping to reach about 15,000 children. And there’s still time for you to help. $25 provides the funding needed for each child to be involved. Click here to donate.