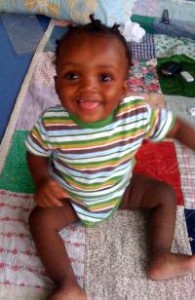 This is Samuel. He lost his mother in childbirth, his father and most of the rest of his family in the quake in January 2010. (Photo and caption courtesy of For Haiti With Love)

Haiti (MNN) — Nobody likes being forgotten. It hurts.

Yet time and time again when tragedy strikes, it only takes a little time or another tragedy to distract us from helping the victims.

Eva DeHart with For Haiti with Love spoke to us concerning the 5-year mark of the 7.0 earthquake that dealt harshly with Port-au-Prince and killed hundreds of thousands of people January 12, 2010.

For Haiti with Love is in Cap Haitian. Located north of Port-au-Prince, the city received much less damage. DeHart says there was some shaking and a little bit of structural damage to the city.

But that wasn’t the sum total of trial the city was going to face as a result of the quake.

DeHart says, “In the North, it was more the busloads of people that they were bringing up from Port-au-Prince: people who were in shock, people who had only what was left of the clothing on their backs. They were being dropped off in the streets, and the buses went back for more people.”

At this point, there was no plan beyond getting the people out of Port-au-Prince. DeHart says, “They were hungry, they were dirty, they were just basically wandering the streets trying to figure out where they were and what on earth had happened to their lives.”

Now, DeHart says, the people have mostly assimilated into the Northern population or made their way back south.

However, in many cases there hasn’t been much to go home to.

“Not much has happened in a lot of places in Port-au-Prince. They still have tens of thousands of people in tent cities. There are streets that haven’t been touched, so there are downed wires, broken poles, rubble from buildings,” DeHart explains.

She says while it does happen, rebuilding is a rare occurrence.

Initially, people from all around the world were sending aid to Haiti. So why hasn’t Port-au-Prince been reconstructed after five years?

“The money just didn’t make it down there. It was really sad,” says DeHart, “There were a lot of good intentions that just didn’t get fulfilled.”

DeHart also says that very little, if any, aid was directed to the Northern cities like Cap Haitian. There was little to be done to help the thousands of displaced people straggling into these cities.

For Haiti With Love and other organizations did their best to provide clothing, food, and encouragement. “Basic survival tools were all we could offer them,” says DeHart.

Initially after the earthquake, it seemed as though the entire world was ready to help until things were better in Haiti. “Suddenly Haiti was making headlines,” DeHart says. “The disaster needs were on the front pages of newspapers all over the world.”

DeHart remarks that it didn’t take long for the world to turn away–even those who had been doing wonderful work to help people in need.

“It was disappointing that the interest faded so quickly and that so little was accomplished later. They saved lives, but they didn’t continue on to help those lives become quality lives again.”

DeHart does see people still impassioned to help Haiti. Though it hasn’t been enough to answer the immense need of many Haitians, it does inspire something else: “It gives them hope that people haven’t forgotten them. Anything that people can do, and definitely pray, it will make an impact.”

You can go on a missions trip to Haiti to learn your passion and how you can help. If this isn’t an option for you, consider partnering with a group like For Haiti With Love financially. You can also pray for God to be known in Haiti, and for Him to be a comfort to them.

“They’re neighbors,” DeHart says. “They’re so close. They have been hit with one natural disaster after another in a country where the majority of the people were living so far below what we consider the poverty line that we can’t even fathom surviving at that level.”