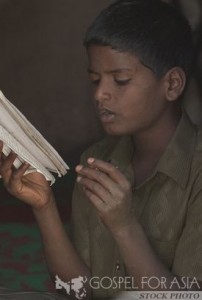 (Photo Courtesy to Gospel for Asia)

International (MNN) — In Revelation 3:16 the Lord says to beware of the lukewarm Christian, the one who calls himself a Christian but does not live like one.

Rohak is one such man who called himself a Christian but never went to church. His son, Pandita, says his dad was devoted to alcohol, not Christianity.

One day a Gospel for Asia worker offered Rohak a copy of the New Testament. Despite being completely illiterate, he accepted it. When he returned home, Rohak handed the book to his son and asked him to read it out loud. Rohak listened as his son read from the book of Matthew.

God’s Word began to stir in Rohak’s heart. After hearing the first mention of Jesus, in Matthew 1:18-19, he decided he wanted to hear from the Word of God every single day.

The more Pandita read to his father, the more he thought about the Word. As God’s Word was planted and took root, Rohak began to be transformed from the inside out. He gave up his alcohol addiction, and his desires changed.

One day Rohak met a pastor who came to his village. He spoke with the pastor about attending church on a regular basis to learn more about the life of Jesus. He soon decided to completely give his heart to Christ.

Your support can help Gospel for Asia bring God’s Word to more people like Rohak. Pray that Rohak and his son would grow in the Lord. Click here to learn more about the work of GFA.