“We assist several ministries in Myanmar or Burma, and quite a few have their own Bible colleges,” Christian Aid’s Stephen Van Valkenburg explains. “One of the ways they reach out, and also train their students in the Bible colleges is to send them out in teams.”

Teams usually consist of three to five students who are supervised by a faculty member from the college. They will travel long distances – usually by motorcycle, bus, and trekking to get to tribal villages where the people are unreached by the Gospel.

The college or ministry will send in someone culturally similar to the people group and request permission to hold ministry camps for children, teenagers, and adults. Once they receive permission, students will share the Gospel while the people have a break from their work. 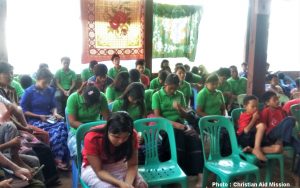 “During that time, they will teach them songs, Gospel songs, they’ll teach them about the Bible, who God is and Jesus Christ is, they’ll share the Gospel with them. And so, they have a whole week where they will just spend that time sharing with them and helping them to understand who Christ is and what Christ did on the cross, and all about the biblical view of God,” Van Valkenburg says.

At one of the most recent camps, “355 were saved and 27 were baptized during this time, and also because of funds [students] received, they went to give out rice and cooking oil, and blankets, and clothing to some of the poor people.”

Giving tangible support to the people is one of the most effective ways to open villagers’ hearts to hearing the Gospel.

Van Valkenburg says this has been an effective way of sharing the Gospel and establishing churches among the unreached people groups. This has further helped build relationships between the ministry, Bible colleges, and the villagers.

Finding a Way for Ministry

“It’s a great opportunity for ministries to reach out and the people there are very receptive and almost always, the government did not cause any kind of a problem for them.”

About 88 percent of the Myanmar population is Buddhist. On the Open Doors’ World Watch List, the nation is listed as the 24th worst nation to live as a Christian as far as persecution is concerned. Christians have faced persecution and continue to.

Van Valkenburg says the persecution is occasionally from the government, but usually from society because of cultural beliefs.

Myanmar Buddhists typically believe that being a citizen of the nation goes hand in hand with being a Buddhist. If someone were to convert from Buddhism to Christianity, they would no longer be seen as a citizen of Myanmar.

“Within Buddhism, there is a lot of persecution just because in their minds, when a person believes in Christ, they’re no longer referencing that way just because it’s within the Buddhist culture because what they believe then is that if you’re a parent and your children believe in Christ, they believe that when they die, they’re going to starve because their children are not offering… food to the spirits.”

However, despite the persecution Christians have faced, they have remained resilient and continue sharing the Good News of Christ.

“Even though there are issues that stay in the way for Christians there to easily have ministries, they find a way,” Van Valkenburg says. 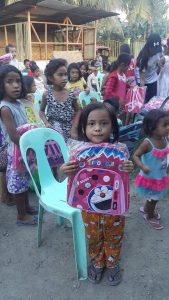 Burma is among the poorest nations. But you can financially support Christian Aid’s indigenous partners so they can continue hosting ministry camps for unreached people.

“A little bit of resources actually goes a long way to enable them to do much for God’s Kingdom.”

Your support can provide rice, cooking oil, and other supplies that show the love believers and Jesus have for these unreached people groups. It can also send students to remote villages to act as the light of Christ.